Late yesterday I learned that Trafigura were moving their domicile from Switzerland to Singapore. They are a major presence in Geneva and this will start sounding alarm bells amongst the governing elite. It wasn't that long ago that the corpulent local finance minister David Hiler was telling the voters here that Geneva was full. They didn't want anyone else, especially from the financial (read hedge funds) community coming here. M. Hiler has done little to enhance the canton financially to make it recession proof. 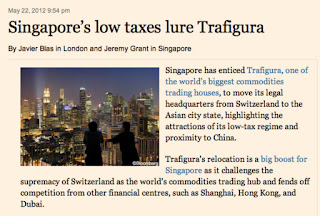 A year ago the Economist had started to point out the rising cost base here.  The Genevois in my experience are people that have been used to taking a 2% turn on everything and looking the other way. Unlike Zurich or Basel people here seem generally unhelpful to the norms of international business. So what happens when the lights go out?

The CHF is pegged to the Euro at 1.20 currently. I wonder if the Swiss are willing to debase their currency further to save jobs at the various corporates here in Switzerland?

Just in case you thought that China was the answer the World Bank has downgraded Chinese GDP this year from 8.4 to 8.2%.  They are still behind the curve.

Late yesterday former Greek Premier L-Pap pushed the exit button that caused the last hour tumble in risk assets. Clearly the Greek ruling elites are starting to understand that they need to get out of the Euro or get out of the country before they get taken by a mob. Meanwhile EU leaders will gather for a special summit today in Brussels. Good news if you're a business in Brussels, bad news if you expect a solution. My fav pre-conference quote comes from Michael Meister, a member of Mrs Merkel’s Christian Democratic Union party, who said there was nothing to stop France and Italy from going it alone on common bonds. HOW DOES THAT WORK???

I missed the Giro live yesterday. Joaquin Rodrguez of Katusha still has a 30 second lead in the general classification. My pick for the Giro, Ivan Basso lies in 3rd 1'22" behind. The key is trying to work out whether Basso is still the climber he once was. The sprinters have gone now, so in my mind the real race has begun now.

Velo news today has a great article on the pros and cons of spending your way to poverty trying to get a lighter bike . Check it out ..... 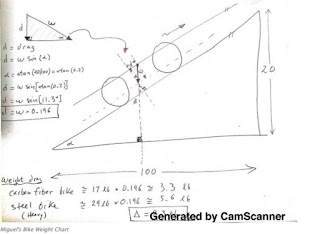