Known unknowns . . . that about sums it up for the Greeks and the French and everyone else on the good ship eurozone today. So lets see where we are:

1. We know that the Greeks don't have a government. The unknown part of this is will any coalition be able to form around the idea that holders of Greek debt need to be paid back.The talking heads would have us all believe that markets have this priced in. I doubt it and thats why we're seeing this reaction to events.

2. We know the French have a government. The unknown part of this is Hollande's commitment to his own manifesto. I'd bet that Hollande will kitchen sink everything he can in the first 100 days in normal political fashion. The problem is that unlike in most circumstances this will only serve to panic markets further and cause a run on French debt. I do not believe he'll have one centime to spend on teachers, police, firemen or a new line of men's cologne.

"Carry this message far! Remember for the rest of your life this great gathering at the Bastille because it must give a taste to other peoples, to the whole of Europe, of the change that is coming. In all the capitals, beyond government leaders and state leaders, there are people who, thanks to us, are hoping, are looking to us and want to put an end to austerity," he added.

3. We know the Germans believe they are being used by the southern eurozone to pay for their tax dodging, beach combing, cocktail sipping lifestyles. The unknown here is just how long the people in the fatherland are prepared to put up with this situation. The state elections over the weekend show that they want to kick someone, but their problem is that the German left offers no alternative. 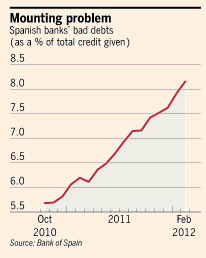 4. We know the Spanish banking system id basically a fraud and needs taking apart. The unknown here is what it will cost to bail out the system and save Spain. A society with 25% unemployment cannot seriously manufacture billions of euro's to save everyone. If you have your money in a Spanish bank you need to get it out now.

For readers that follow me on twitter you will know I escaped the city to do some thinking this morning. Over 4hrs on the bike tends to clear the head of even the most muddled thoughts. I managed 86KM's and over 1100m of climbing. I'm tired, but in one piece, unlike many of the top names at the Giro d'Itallia today. It was good to see Matt Goss get up for a win after all the seconds he's had recently, but jeezus the crash at the end looked nasty. Watch for today's nut job Roberto Ferrari to spear across the road and take out Cavendish etc. Dear me that looks like it deserves a red card: