Are we learning anything yet?

So it's come to this. The market is starting to fade rallies more quickly at this stage. It's almost Pavlovian watching people waking up to what's going on. People would still like to believe we are back in the glory days of 2009 when grand alliances were de rigueur, but that's wrong because the core Franco-German axis is disintegrating.

Something else taking a whack is Australian housing. I was reading my home city's poor man's NYT, aka the Sydney Morning Herald and noted with some concern that the main organ of the real estate bulls is starting to flip as signs of mortgage stress grow evermore ominous. "Forced home sales rise as slowdown bites" screams the headline:


"The trend in Victoria is showing up in NSW, the most populous state. Filings with the NSW Supreme Court show repossession have risen to 2955 cases in the nine months to March 2012.

I'm not surprised Victoria is getting hit the hardest as it is the manufacturing hub of the country. The over-valued AUD is biting and local consumers are hung-over on cheap debt. Add to that the fact that house prices in Melbourne have historically traded at a 15 - 30% discount to Sydney and have in recent memory (2010) traded close to parity should of course have rung alarm bells to many.

Not so the ECB where the ex-Goldman Sachs man in charge, Mario Draghi, is once again confusing leadership with democracy:

“We have now reached a point where the process of European integration needs a brave leap of political imagination,” Mr Draghi said in a speech in Rome

What he's really calling for is for politicians to ignore their electorates and do what the bankers want. Even a dedicated free market blogger like myself is not too arogant enough to understand that markets only function by operation of a consensus; a consensus that says the best fairest way to interact economically is through transparent open markets. That consensus is being challenged every day now. Fade the rally . . .

One commodity I won't be worried about on Sunday as I dig deep on the Cyclotour du Léman is oil. Bikes use very little.  Oil is consolidating at the moment because of the  intransigent attitude of the former revolutionaries who run Iran. Talks in Moscow have ground to a halt, though my favorite quote comes from diplomatic lightweight Lady Ashton, the EU high representative who chairs the six powers (US, Britain, France, Germany, China and Russia) talks:

“It is clear that we both want to make progress and that there is some common ground, However, significant pressures remain.”

NO it isn't clear at all Lady Ashton, I'm terribly sorry. Go to neutral on your oil positions here because this is going to continue all summer. Maybe buy crude sell products .... just a thought?

Treviso in Italy is home to Pinarello bikes. The 19th stage of the Giro will start here.

It's a lovely town surrounded by the industry that uses the outer ports of Venice to export goods around the world. 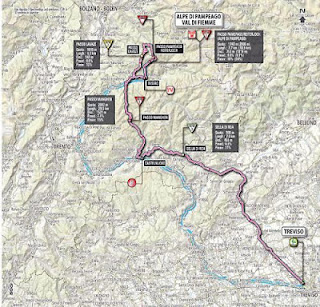 There are five categorised climbs including the 20km ascent of the Passo Manghen, with an average gradient of 7.4 per cent but hitting twice that at its steepest point. It should be a great day if you like pain.