Something for the weekend sir? Part 1 - Welcome to the Stelvio.

I thought I'd do a weekend special edition of the blog focused on cycling. Time to ride ....


But before the fun, a little business. I'd like to mention another late day slide in the US. I think what we're seeing is the opposite of the late last year early this year buy on Fridays because governments solve problems (i.e. pump in money) after weekend meetings. The equity market is learning that the solutions now are not as clear to our over-extended politicians as they once were.


I also want to mention the latest case of insider trading by a brokerage house. No one who knows me and my experience of Japanese markets would be in an doubt that I've always considered much of the banking world in Tokyo as highly suspicious. The house of Nomura is now facing its second charge in two months. The Japanese SESC believes an employee of Nomura, which was an underwriter of the Mizuho Financial Group offering in 2010, tipped-off a fund manager at Sumitomo Mitsui Trust Holdings allowing them to sell the stock ahead of the placing. What a surprise .... I've seen it numerous times.

I'm declaring today a Stelvio Holiday .... as in the final great climb of the 2012 Giro d'Itallia. My plans are simple. Coffee with friends this morning, then clean and prepare the Pinarello for tomorrow's Tour du Leman 110km section ride and finally sit in front of the TV and watch the pain.

This is what the riders will look up and see this afternoon . . . if it's fine: 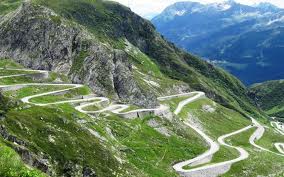 Endless switchbacks. The race is there for some to lose and some to win. If the weather is bad it might even snow. The pain will be extreme. They will climb 1550m in 21.6km for an average gradient of 7.2%. The riders will summit at 2750m. Today there is at least a 10% chance for rain. It should be in the mid-teens in temperature. 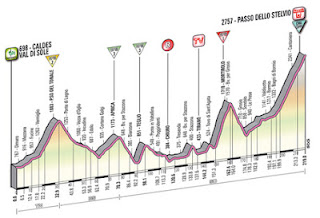 Before they get the the Stelvio they'll have to climb Mortirolo. Lance Amstrong called Mortirolo the hardest climb he's ever done. It is only 11kms, but it rises at an average gradient of 10.5%. If you want to know what that's like set a treadmill at a gym at that gradient and try and jog for 11k's at say 7kmh. I bet you'll have trouble finding a treadmill that will let you set such a gradient.

Part of the way up is a famous monument to the now deceased champion Marco Pantani:

In the official ratings it would seem idiotic to put these two climbs togetherf on one day, but that is why the Giro is the Giro: 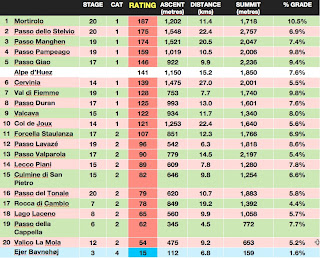 I hope you enjoy your day as much as I will.