Scenes from the Giro . . . why did I come back to this mess

Back in the 70's there was a bumper sticker that said "I'd rather be sailing" and there was also one that said "SH*T HAPPENS". Well these are both apt for what I'm feeling today as I watch the market struggle with yet more conferences amongst the leaders of "G-somethings". Has Hollande actually seen his office yet?

If the Italians are worried about the world then they didn't show it in Cherasco on Saturday. It was a sea of pink. Smiling people everywhere. Cherasco lies just to the south of Turin and is at the centre of a valley brimming with specialized industry and high end agricultural endeavors. This is the reason why Italy can inflate out of this mess. Unlike Greece and several other eurozone members Italy actually produces things we all want to buy.  If they went back to the lire they could inflate themselves out the mess in a couple of years. 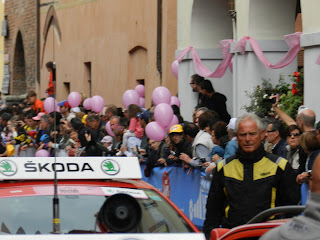 Pink is the predominant color of the Giro as the leader each day dons the maliga rosa as he leads the field through Italy. The Italians love the Giro ... they told me it was harder than the Tour de France.

I don't have any statistics that support one being tougher than the other, but several of the climbs are considered above their TdF counter-parts. The daddy of them all is the Stelvio which is the highest climb in any of the Grand Tours. The beast summits at nearly 2800m, this year the Giro will approach from Bormio and climb 1550m. 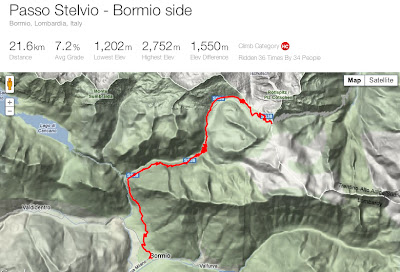 It rained every day while I was in Italy and I only managed one short bike ride on Sunday morning.


The highlight of course was that I managed to ride the 24km's to Barolo and spend a good hour and considerable Euros tasting and buying wine.


Luckily I had the support crew on hand at all times to help me with various combination's of wine, meats and cheeses.

We made friends with a great euro couple ... semi retired German man, Italian lady. It was interesting to hear about things from their point of view. They seemed only too aware of the problems they lay ahead. The gentleman had lots of stories and observation that only a northern European that had lived in the south for 20 years could have. I was telling him my views on QE and the distruction of the Euro. I hope I didn't scare him.

The markets are no doubt steadier today because of all this talk of growth alliances. The nervous shorts seem to want to run for the hills in the face of Mr. Hollande and President Obama. As my new German friend said: "Now these people have to go through what we did with East Germany". If this is what 83million Germans think, then how can the calls for ECB issued bonds etc. get through. Poland's Finance Minister wrote an Op-Ed today in the FT in which he declared:

"There is only one institution that can provide the firewall that Europe needs in the time we have before the Greek elections, and that is the ECB. It should immediately announce that in the event of a Greek exit from the eurozone it will stand ready to buy unlimited amounts of the sovereign bonds of countries remaining in the euro for a limited period of time – say a year or 18 months".

Oh my, so basically blank cheques for all???? Meanwhile Obama is staking his hopes on Europe being more stimulative, thus saving he and Bernanke from the growing anger in the US amongst fiscal conservatives. If you ask me whether I think Obama loses, then I'd have to say no. I don't even think it's close . . .  at the moment. But one more round of QE and the scale might tip towards Romney. I've said before that the tipping point could be the US student loan numbers when they get published in September. If they show a disaster in terms of arrears then I don't know what might happen?


I really don't want to talk about JP Morgan's loss ballooning towards 5bn . .  you can read about that in the FT's Alphaville. Nor do I want to talk about the goings on at UBS's Asia II desk at their Wealth Management /  Private Bank unit. I kind of would like to say something about Facebook, but the stock is down over 10% as I write this and to be honest I didn't tell you so. In fact I admit that I was quietly positive. I did tell you that banks need to raise capital and Barclays move to sell part of cash cow Black Rock strikes me as a sensible first step to showing the euro banks how you have to clean yourselves up. Mind you I still suspect there's a whole lot more that needs to be done at Barclays.