It's the elections stupid, not just jobs . . . Giro d'Italia

I'm still not sure about Fridays job data and the market reaction. As I write this on Sunday afternoon I think the markets may have been more worried about the eurozone elections today. . .

1. French presidential elections, Hollande, is on course for victory and his election will be a direct challenge to the Merkozy austerity consensus.

2. Greek general election. This most likely result will have to be some grand coalition. I'm not sure the Greeks have the will anymore. This could be ugly. The Greeks have a bill auction on May 8 - I hope they already have the buyers lined up.
3. Merkel / Germany has state elections in Schleswig- Holstein. Another possible mess. Personally I rule out a CDU / right win. Just another result which will test the resolve of markets.
4. Finally leaving aside the start of the Giro d'Italia we have First round of Italian local elections. I haven't followed this, but the markets will be nervous ahead of the May 11 bill auction.

How can any of this be good. I should have thought about this on Friday. Yes the US jobs number was not good, but more importantly the markets clearly said the multiple risks were not worth holding over-priced equities over the weekend.

Readers of my blog know my cynicism regarding the natural gas market. A mate of mine recently did quite well taking a quick turn on some bombed out NG producers, but I don't trust. But, instead of droning on about how bearish I am lets look for some positives. The main one I see is that activity in the forward hedging market has nearly completely dried up. Platts news service reported on May 2, that one of the US natural gas market's biggest and richest players, John Arnold of hedge fund Centaurus Energy, essentially walked away from the market because trading margins had shrunk to uninteresting levels. The same piece said that traders believed that the largest producers such as Chesapeake were likely to have no hedges at all, which is very unusual. To me that says that producers see little downside from here and this no doubt helped my mate  in his trade. What I wouldn't want to do though is move too far downstream in my thinking as margins seem unlikely to expand enough to help generators of power via NG. Stayed tuned.

Finally an interesting OpEd in the NY Times regarding India's slowing economy. The IMF has a growth f/c for India in 2012 of 6.9%, yet 4Q11 was 6.1%. Surely it's not reasonable to think that growth had accelerated since then given the energy price surge? Just another reason to not expect that the BRICs are going to be bailing out the world anytime soon.

I did the Col de Saxel on Saturday, just to see if I could beat my time from earlier in the week. Good news is I took 3 minutes off my climbing time. Bad news is I'm still 18th of 19 riders who have recorded times on Strava. If I can cut that by a minute I'll shoot up the board . . . well 3 places: 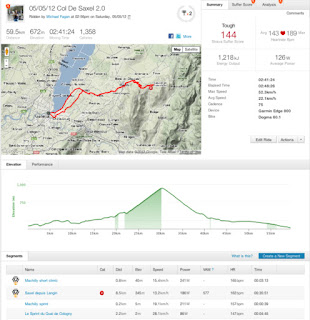 I had ball going up and was really proud of myself and the way I rode. On the flip side the blue skies disappeared on the way back down and I had to ride the 30k's to Geneva in pouring rain. I literally was able to pour water out of my shoes when I finally made it home. Still I'm very lucky to have the opportunity to do this. Smile.

The Giro d'Italia always casts one's mind back to the great feats of past riders. I particularly like the image of the bald Marco Pantani sprinting up mountains in record times. 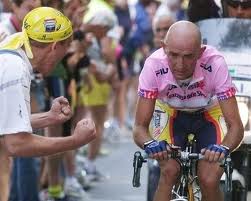 Of course Pantani was juiced  . . . the picture above shows him in 1999 when he smashed climbing records throughout the great stages in the alpine regions of the north. Apparently he was on the works . . . but the Italians still loved him. He died of cocaine poisoning in 2004. There's a memorial to him on the great climb of the Mortirolo and this year on stage 20 of the Giro the riders will climb past the memorial before heading for the heart stopping Stelvio. I wonder what they'll think as they look up the 12 degree slope on the hair pin switch back where the statue sits??? 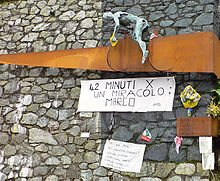 Just for the record here's stage 20. I suggest if you want to try it you get very fit .... there are parts of these climbs that reach 18 degree gradients. 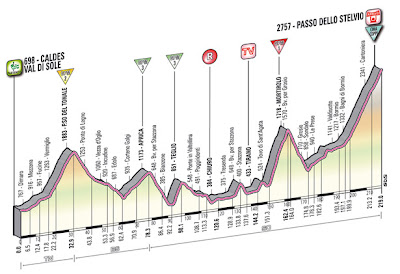 Stage 1 Time trial .... BMC's Taylor Phinney was fastest, though he had mechanical problems on stage 2, you can follow him on Strava ... just so you know the difference between pro's and we mortals.