Schadenfreude. . . what a great word. It seems a particularly good choice for word of the day given the rather large mishap incurred by JP Morgan. Today is the day that Jamie Dimon got his.

They'll be more than one ex-Lehman Bros or Bear Stearns employee cracking open a 2008 bottle of bubbly and toasting Saint Jamie. For weeks now the rumors have been circulating around the hedge fund world about an enormous prop bet gone wrong out of London. I didn't follow it that closely as I trade more commodities than credit now days. Whatever the circumstances surrounding the 'flattner" trade the one question I'd ask as a regulator is "who authorized this trader and can you please show me your daily scenario analysis for the last 2 months". If everything is above board they should have all this and they should be able walk me through their thinking with a white board and a smile. If they can't ... I think you have a big problem.

I think JP Morgan is lucky that the Spanish and to a lesser degree the French also have their own banking problems. Soc Gen continues to writedown all sorts of assets in it's Greek unit Emporiki. It's funny listening to the talking heads discuss the situation at SocGen . . . "well they cut the financing costs of the unit in roughly half in the last year". This reminds me of HSBC and its disastrous foray into low end lending in the US via Household Finance Corp, who ended up being the second largest subprime lender in the US. That bled for years. HSBC were lucky they had Asia, Soc Gen doesn't have an Asia, but they do have an Italy, a Spain and ... well you get the picture.

And finally Spain. €30bn is a lot of new provisions and a lot of capital to set aside. You can smell the nationalization coming down the pipe. The problem is that I believe it's likely to come in slices in a similar fashion to the Japanese approach post the bursting of the property bubble. The Spanish have already had a lost half decade, but its easy to see another 10years before this gets sorted out.

It's the weekend and it;s time for my own bike race. The Giro can wait. I'll be competing in the Brevet Jean Brun on Sunday. There are two courses, a 70km and a 100km. If the weather is cool and fine I'll probably do the whole 100k's. If it's wet or hot it's the 70k course as we'll be going up the Mt Saleve climb. It will be my first time up Saleve and according to the local guru's it's a must do before I leave. Luckily one of my favorite websites has great coverage of the mountain and covers all 5 possible routes. Cycling Challenge is a fantastic site for anyone in or coming to Europe. 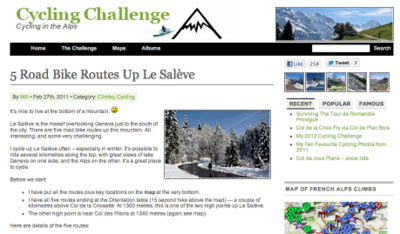 I haven't met Will and his friends, but they do a great job of providing the reconnaissance for many of my climbs. 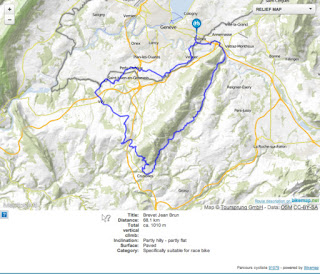 The above is the bikemap.net map of the 70k course on Sunday. Basically on the short course you circle the summit, while in the long course you do the extra 300m to the top. So here's the climbing data: 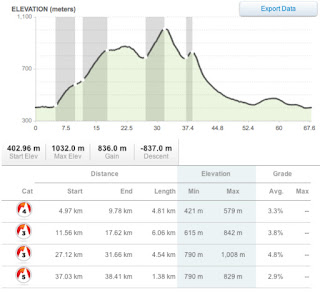 So what we have are two Cat 3's, a 4 and a 5. The longest climb is only 6k's and the average gradients are all under 5%. Call it 850m's of climbing. That's a good morning out. Here's a photo I took from Baillaison looking towards Saleve this morning, just to give you an idea of the topography: 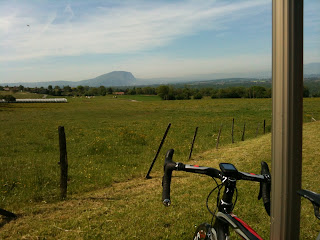 That's it from say 25k's away. Sunday should be fun.