The Prisoners' Dilemma .... and what would St Francis say about the Giro d'Italia?

Prisoners' Dilemma is a classic of game theory. In the "game" the following situation occurs:

Two men are arrested, but the police do not possess enough information for a conviction. Following the separation of the two men, the police offer both a similar deal—if one testifies against his partner (defects/betrays), and the other remains silent (cooperates/assists), the betrayer goes free and the cooperator receives the full one-year sentence. If both remain silent, both are sentenced to only one month in jail for a minor charge. If each 'rats out' the other, each receives a three-month sentence. Each prisoner must choose either to betray or remain silent; the decision of each is kept quiet. What should they do?

Yesterday I mentioned that the Greeks had a decision to make in relation to the maturation of €435m of outstanding foreign law bond. It was a tough decision, similar to the prisoners dilemma in my view. They chose to honor the bonds. Did they play the game successfully? Well here's what we've learnt:

a) Holders of local law bonds throughout the Eurozone must now treat these as inferior or in some way subordinate to foreign law (mostly UK) issued paper.

b) Someone in Greece is running the country, but we don't who authorized a payment that some estimate to be worth about 25% of available cash in the country.

c) Greece is preparing a way out of the Eurozone. By effectively telling participants in the euro-bond market centered on London that holders will get their money back they have signaled that they know they have to prepare for an ECB-less world.

Of course we had another version of the game being played in Berlin last night. When Hollande did get to Berlin he and Frau Merkel look decidely like two prisoners being subjected to the dilemma. 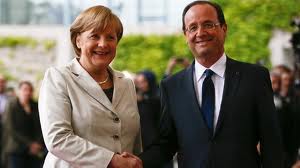 They obviously both want to get away with the minimum sentence, but how? I think Merkel will rat out Hollande as she holds more cards in terms of economic strength. Hollande's best solution is to rat out Merkel and cause them both to suffer a middle road sentence. We shall see.

Yesterday BHP Chairman Jac Nasser threw a bit of "tape bomb" out there when talking about the company's expansion plans:


"It is all about appropriate allocation of capital. When Marius (Kloppers) talked about the $80 billion, the environment was different, we should pause, take a deep breath and wait and see where the pieces fall around the world."

There's a lot of analyst who needed to be reminded that in the real world prices are falling. BHP fell ... 4% to close around a 3 yr low. Of course the post 2008 low was AUD20 and the AUD itself was at the time in the low 60's. Lets not consider these as a target because much of the money printing since then (QE) has probably raised the floor higher. Right now BHP is at 35 and the AUD is about 0.99. The way I look at it BHP is still expensive in USD's, the primary currency it earns. I don't want to put targets on it, but take a BHP model plug in ther following: Copper 3.20, Oil (Brent) 90 etc . . . you get the picture.

If St Francis of Assisi were alive today I wonder where he would put his Order's cash? I know he took a vow of poverty, but he'd be worried man today looking at Europe's problems. I would hope that his spirits would be raised by the sight of the riders gathered in front of the basilica. The Maglia Rosa signed in ready for an interesting day in the saddle. 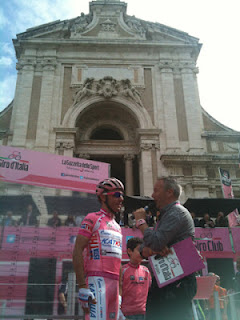 Today is classified as a flat sprinters stage of 255km's. I really hope that Canvendish, Goss and the other sprinters get a clear run at the end ... either that or let's hope for a strong break away.