Something for the weekend Part 2: Another Geneva long weekend.

Pentecost to some, Whit Monday to others. Whichever way you like it, it spells vacation here in Geneva. So with the roads deserted and some like myself recovering from yesterdays Tour du Leman I give you part deux of my weekend blog.

How many people genuinely cringed when they read Christine Lagarde's interview with the Guardian this weekend? Honestly? Well I think if you're Greek it probably was a little to close to the bone, but for the rest of us she was just telling it like it is.

Even more than she thinks about all those now struggling to survive without jobs or public services? "I think of them equally. And I think they should also help themselves collectively." How? "By all paying their tax. Yeah."

It sounds as if she's essentially saying to the Greeks and others in Europe, you've had a nice time and now it's payback time.

And what about their children, who can't conceivably be held responsible? "Well, hey, parents are responsible, right? So parents have to pay their tax."

To me it sounds like even the most pro-euro groups are losing their patience with the Greeks. Comments are now coming out of the SNB, which seem to suggest that the capital leaving Greece for whatever reason is starting to impact the Alpine state. Consider the fact that the Swiss, who pegged their currency to the Euro at 1.2 are now at a point of having to look at restricting capital inflows. Why, because they are perceived as the ultimate safe haven. Back in the 70's Switzerland pegged to the DM and in doing so adopted several policy initiatives:


(a)  A ban on interest payments to non-resident Swiss bank balance increases
(increases so as not to penalise existing holders)
(b)  A quarterly charge on non-resident Swiss bank balance increases. The charge varied during 1971-79 between 0% per quarter and 10% per quarter, depending on the capital inflow pressure
(c)  Prohibition on the purchase of Swiss Franc denominated bonds, property and other securities by non-residents
(d)  Restrictions on non Swiss-denominated borrowing by Swiss residents.


So with pressure mounting it's likely that the SNB already has in place some measures to stem the deflationary destruction of a move to parity in the CHF to Euro rate. If they impose this I respectively suggest it's basically the starting pistol for the "Grexit".


Of course Asia has a different view. Today market's rallied there on the back of more Chinese stimulation talk. Apparently this was sparked by figures published today showing profits of industrial companies across China fell 1.6% in the first four months of 2012 this decline follows a 1.3 percent drop in the first three months, in line with slowing economic growth.


After my comments on Australia the other day we get some more confirmation of the slowdown there as engineering group Hastie collapsed. 7,000 quality jobs are likely to go. Hastie of course is leveraged to the construction sector, so it shows what the general trend must be downunder. Of course the AUD was up a full cent chosing to rely on the Chinese speculation than the reality of the situation. Add to AUD shorts.


My legs are pretty sore after yesterday. I had hoped to average 30kmh for the 110km course from Evian to Lausanne. I was a shade under. 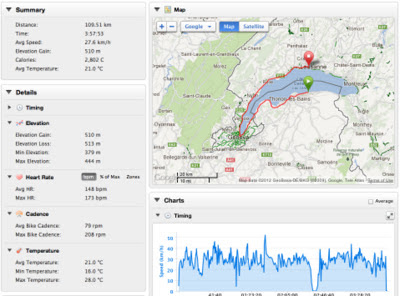 My Garmin track says that I cracked 4 hours for the journey. I should have been closer to 3hrs 45mins, but I fell off the back of a group dominated by some anglo-saxon's at the 85km mark and was unable to keep up the pace when I was stuck in the no-mans land between two groups. My fault really as i let myself lose concentration when we started to hit some traffic around Morges. Oh well, live and learn.


My bike went well and for once I wasn't regretting keeping my aero wheels on as the wind, except for a section near Nyon was fairly benign. I was surprised at the number of Time Trial / Triathlon bikes people were using for the 110km course. That's a long way in such an extreme position. There's reason you don't see the pros riding 100km TT's.


Great to see our Canadian brothers in the form of Ryder Hesjedal enjoying the Maglia Rossa and a stirring rendition of Oh Canada. It's been a great Giro to watch, especially the Alpine legs. I just don't think the Italian Tourist Board could get a better advertisement for their country. It was a fantastic travelogue.


I know a couple of my blogs readers who were not cycling fans before watching the Giro are contemplating joining the party soon. One reader asked me about bikes he should be looking at and as I know he's never been one to do things half-heatedly I put together the following list of elite machines. See what you think: 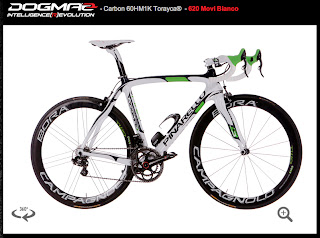 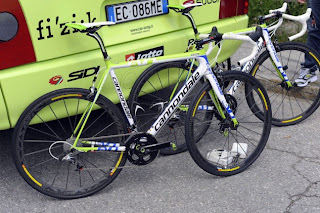 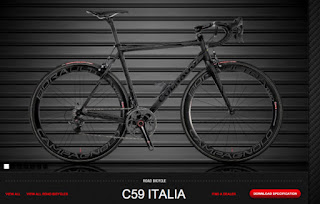 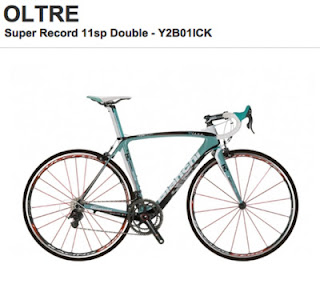 Anyway I've just ordered a Cannondale to add to my collection. I'll be doing a travelogue/blog on the buying and fitting process on my new website which I'm building at the moment. I hope it helps anyone inspired by the Giro to take the next step and joing me on a long hill climb in the Italian coutryside.