Any port in a storm . . . or how I learned to love freight rates.

I have a company from Hamburg coming today to quote on my move home to Australia. They will be the 4th company to quote so far. If I told you that a friend of mine here in Geneva was quoted CHF4,500 to move across town then how do you think a Swiss company would charge to move me to Australia? Here's the thing, so far I've been impressed with the quotes, suspiciously so. Even the one Swiss company to quote was reasonably competitive. Which leads me to ask what is going on in the container freight market?

Thanks to the internet your ability to source rates and quotes is extremely transparent. I signed up for a commercial service at Searates.com. Essentially it's an open tender service that allows you to get basic quotes from multiple sources allowing you to check pricing across the globe. It's free, though I reckon it's probably worth the 100 bucks a year for research purposes.

This is the "CTEXIDEX" or ConTex is a Container Ship Time Charter Assessment Index. It is a company-independent index. The index is compiled by a group of international operating brokers and is updated twice a week. 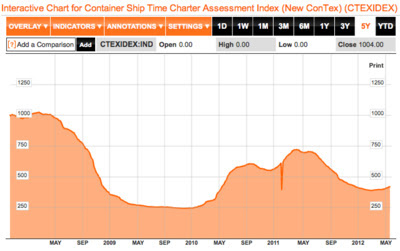 I'm no container shipping guru so the chart for me is about trends and from that point of view it seems to mirror what we've seen in the global economy for the last five years. It tells me that when I moved to Geneva 2 years ago things were bouncing back, but now deterioration has set in and it's a good time to move. That latest up-tick you see is likely to be shipping lines trying to raise rates to make up for the fuel price rises they're suffering. The latest company to warn was Maersk (MAERSKB). On May 16 while reporting quarterly results Maersk said it was hurt by a 9 percent drop in freight rates and 31 percent higher fuel prices. Some analyst think Maersk is just being conservative in downgrading its forecast. This is typical equity analyst thinking. Mangement couldn't be any clearer:

“Right now container rates are at a level where we’re at break-even,” Chief Executive Officer Nils Smedegaard Andersen said in a phone interview. “Rates obviously need to go higher if we’re to be at break-even for the full year as we had a loss in the first quarter. But I do think that this could happen.”

I don't trade the stock, so I don't have to spend hours looking into the reputation of company officials by reading annual reports and press releases. All I know is that something has got to give and this is a space and an index worth watching. If fuel prices start to move down as I suspect they will then will freight rates remain steady or will the over capacity in the sector cause a new freight war to break out? 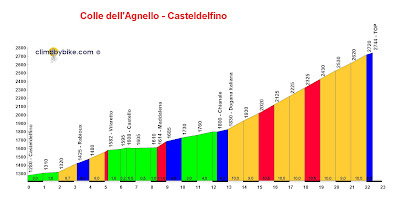 Those red bits are where the pain hits, they show gradients over 10%. From the Itallian side it's about 22km's to the top and the average gradient is 6.5%. That's harsh. I reckon for me that equates to a sub 10kph average speed, so I figure on spending 2.5hrs in the saddle if I attempt it. In the 2011Tour de France they climbed it in the stage from Pinerolo to Galibier Serre-Chevalier. Here's another Aussie doing the climb last year: