There wasn't much hype surrounding the first BBY Disruptive Technology Lunch of 2015. I took along the CEO of a real estate buying agency as he's about to launch an app aimed at residential buyers. I thought it might give him an idea of some of the tweaks other innovators had taken with their tech offerings. These lunches also toss-up a nice cross section of investor questions that entrepreneurs are going to face as they get their message out to the capital markets. Forewarned is forearmed.

Long time readers of this blog will know that normally I like to come to these lunches with at least a modicum of background on the businesses presenting. On this occasion, I hadn't adhered to my routine. I had no idea what PocketBook was, save for the function implied by the name. Co-Founder Bosco Tan immediately came off as self-effacing by apologising for not wearing a suit. Nice touch from a man who's parlayed his position as a security engineer at BAE Systems Australia into a highly touted financial organiser app with 130,000 downloads. 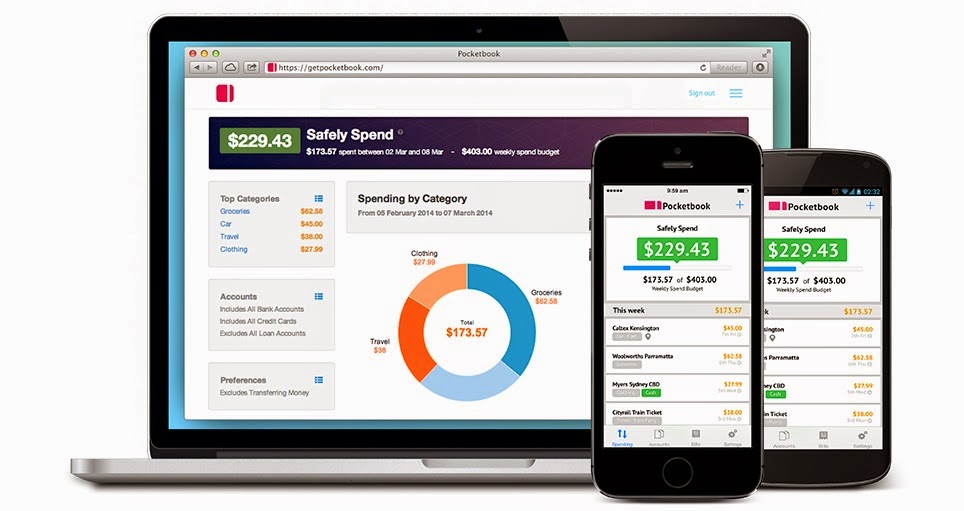 So what is PocketBook? Pocketbook automatically organises your spending into categories like clothes, groceries and fuel, based on your transaction history.

It does this by you taking the "leap of faith" and linking it to your bank account. The algorithms go to work looking for patterns in your history. The result is that it quickly enables you to see incoming and outgoing cash, enabling you to take appropriate action. In addition, you'll get messages through various portals (email, pop-ups, etc.) prompting you of the fact. I think my guest had downloaded it before Bosco got to mid-presentation. Personally I'm a little slower at doing anything that entails me giving my bank account information to a smart app, but that's just me. Bosco himself said that the security aspect of the business is a game of trust. When they first launched, the active user numbers were closer to 30% than the 60% they have today. That's the trust capital being built up, but it also shows how important it is for this business to stay focused on security. One slip-up and users would just shut down their participation, and with it any potential revenue stream.

This blog is a fan of big data, and PocketBook is a great entree into that sphere. As part of their algorithmic scrapings, PocketBook has been doing case studies on various businesses and events in Australia. Bosco presented 4 of these, just to give us an idea of what's possible:

A fairly obvious study into the growth of Uber's market share in Australia. I say obvious because Uber users are smart device-centric and, therefore, the cash flow from electronic transactions is a very accurate measure of Uber's market penetration.

Geographically based study of the impact of cosmetics retailer Sephora's impact on the main retail shopping strip when it opened pre-Christmas last year. The presentation showed the impact versus a number of retail categories, including the big department stores and smaller discounters of cosmetic products.

This case study confirmed what we all know, that the hardware cycle drives Apples Australian earnings and significantly impacts non-Apple sellers in the smart device space. Apple doesn't split out it's Australian earnings for the group, but this presentation study showed what was possible with PocketBook's data scraping.

If you're an Aussie "tech-head", you've been playing with VPN's and geographical masking for years in order to get the latest media. The time lag between US or European release of a book, movie or TV show and it's Australian release used to be infuriating. One media mogul used to buy up all the best police themed shows in the 60's and 70's and lock them down for years, only broadcasting them when reruns of previous shows had exhausted themselves. That's, not the case now thanks to tech. Netflix is an obvious example. PocketBook was able to extract the actual spend on Netflix and interpolate it to a number that that showed just how big the business was without a "real" offering in the country. The reaction to the recently announced roll-out of Netflix in Australia and the PocketBook study has seen multiple new offerings in the download space spring up virtually overnight. The panic is palpable.

So what do these studies tell us about PocketBook? Well, primarily PocketBook may be a chameleon. On one hand, it's a nifty tool for the budget concerned though it's unclear how that translates to revenue from this presentation. On the other hand the business, as it exists, might change radically in line with its use of data scraping. Additionally I wonder if ultimately the data side might create so much value that PocketBook should pay users to take the app? Whatever the long term eventuality PocketBook's future looks assured in some form and investors looking for multi-faceted opportunity could do worse than read through the current offering documents if they're lucky enough to be invited to participate. Of course, if you're concerned with privacy you might be more likely to get upset than to invest.

Singtel is the owner of local telco number two Optus. As part of this they've rolled out some capacity of their VC fund Innov8 (not a spelling error or typo). Alfred Lo is the "Lead Principal" here in Australia responsible for implementing the broader strategy that comes out of Singapore, San Francisco and Tel Aviv. The usual themes in terms of investment targets were all there: 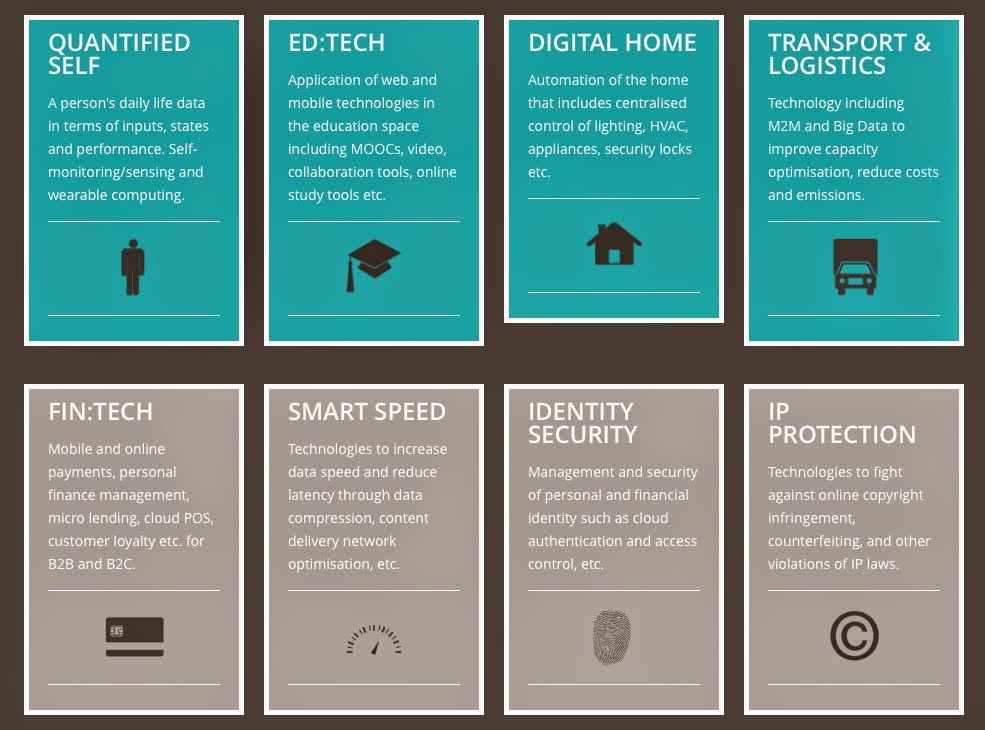 Innov8 partners with the Fishburners project, I detailed at the end of last year. They also have spaces at Inspire9 in Melbourne. I got the sense that Innov8 was focusing on the rapid growth of connected devices beyond the usual smartphone / tablet sector. A good example of this is smart home controller Ninjablocks. 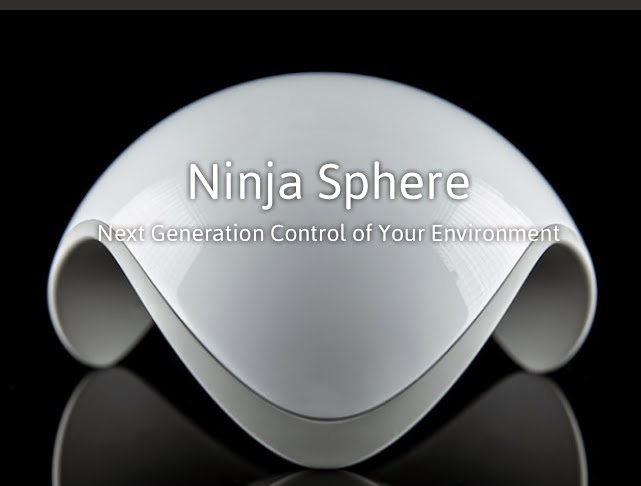 If I understand it correctly, Ninjablocks  is a communications facilitator that allows developers to connect devices within home or work environment without having to worry about embedded programming, electronics, & networking protocols. I love this type of thing in the same way I've always gravitated to the picks and shovels suppliers in every boom. Levi Strauss might not have discovered gold in California, but he did clothe generations in his denim trousers.

On wider business themes, Alfred offered some pithy insights into the current state of the VC space in Australia. I wasn't surprised when he said that Australia in general was underweight. It seems onshore investment in the local tech is about 38%, compared with 64% in Berlin and 59% in London. That's a none too subtle plea to the government to support the sector. This blog is never a big fan of tax-incentivised industries. Solar cells, wind turbines and alike are all very well when they meet real ongoing demand. Where's the value in providing tax breaks to offshore companies unless you get something more than a couple of thousand installation and maintenance jobs?.  If you disagree, I've got a friend who can sell you a solar farm in Spain or better still a bond that enhances its coupon through stripped German solar tax credits.

Finally for readers wondering why VC funds have doubled since 2009 just think about this: There are 80 pre-IPO billion dollar companies just waiting to come to market. Entrepreneurs no longer look to exit publically in the short term; rather they're content to feed out small amounts of equity to diligent investors. If that's you please contact me through my web page IBCyclist Consulting.