Happy New Year! Time for growth . . . unless the the politics gets in the way

Happy New Year to all readers. I obviously decided to take a break over the holidays, but I'm back ready to talk financial markets and cycling.

Lots of the mails I received over the Xmas / New Year break asked me about what might happen to equities in the case of a political bar fight that goes too far. My first thoughts have always been that as long as Bernanke remains committed then the politics will matter less than the printing of money. Time and again we've seen Washington seemingly paralysed in the the face of the bleeding obvious. As long as the GOP is worried more about the Tea Party fringe than actually governing we will be reliant on monetary policy to run the show. Unless the Fed suddenly discovered a new hawkish tone it's unlikely to stop the presses until the unemployment number falls in such a way as it forces their hand.

Now that tech stocks, primarily via Apple are starting to price in a pause in their growth the market has moved on to the cyclicals. Early indicators, such as the iron ore price have rallied strongly in the last weeks of Q4. One of the best charts I received was this one showing the correlation of iron ore and the Shanghai Composite: 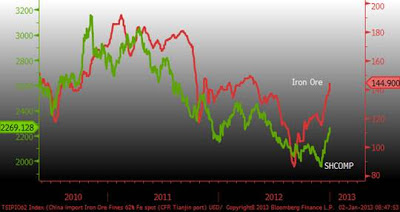 The land auctions in the major Chinese cities have picked up and the leadership of China will soon be faced with yet another inflationary challenge. Of course that challenge is similar to the one faced by many of the Asia Pacific economies which remain in a somewhat two speed mode. Here's an example, Singapore:

For the last couple of months Singapore has seen contracting PMI, but the equity market there has chosen to go with the money flow and continue to rally. The market is clearly using data from the US and China, rather than the internal data. On Friday Chinese PMI showed signs of continuing to rally. China’s services PMI for the December was 56.1 compared to 55.6 in November. This could be dangerous for investors in those countries as the expectations are very high that the combination of lose monetary policy in the US and stimulus in China will eventually lift up their manufacturing industries to comply with stock prices.

The situation now remains somewhat cloudy, especially with the possible effects of the debt ceiling negotiations in the US at the end of Q1. One thing I'm surprised with, especially given the rally in key commodity prices in the AUD. I would have thought that a rally should have ensued, but the currencey remains mired in the 104 - 105 range. Clearly their is a feeling that the interest rate policy of the RBA remains in lowering mode, while US / China growth implies the bottom of the market for rates there. Here's the AUD: 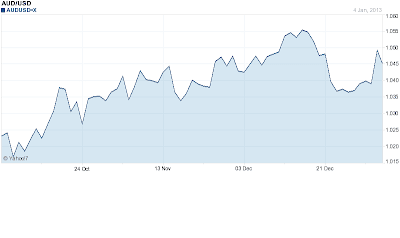 If the FX traders have this right the bond markets in the US are extremely dangerous. Why hold bonds if you see rates going up? Lot's to think about then.

I managed to get on the bike a bit over the break. Yesterday I did a peloton skills morning with my club: SCC. It's worthwhile getting involved in something like this as you generally up your own output and learn a few things along the way. SCC is doing a trip to the Australian Alps in February and if I have the time I think I'll take the Cannondale down for some climbing. I also have committed to a century ride in Northern NSW in August. I'll be going up with a couple of newbies and I hope that by setting this goal early in the calendar year I'll be encouraging them to get bike fit sooner, rather than later. Here's the target ride: 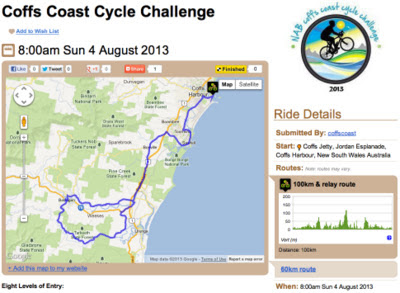 If you'd like to join our team just drop me a line. If we get numbers we might even get our own team shirts.