It's getting hot here . . . mistakes happen

The Australian heatwave has finally hit Sydney and we're now officially heading over the century mark for the day. As you you can see from my weather app the midday temperature was hitting 37 degrees and the weather people here are looking for it to top out in the low 40's. 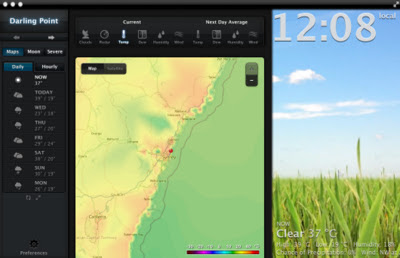 I'm heading out on the bike to do some light work near Centennial park and to grab a cooling smoothy. I won't be trying to set any records and I will be taking two water bottles.

Yesterday there was all sorts of shenanigans in Korea and specifically in the Kospi futures. I got some details of what happened via connections in HK. It seems an algo sent an order to buy a 1 lot 100k times. This means that at one stage there was a bid for USD15bn of Kospi futures. 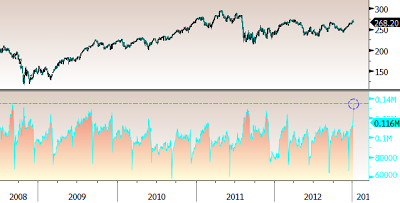 As a result of all this Kospi futures turnover jumped by 30% and open interested went up by 19k contracts. It's likely that when margins are due at 1200hrs Seoul time today that the perpetrator will be forced to unwind . . .  quickly . . . if they haven't already done so. Orderly markets? Maybe?

I haven't mentioned Samsung much since I began this blog. Back in the early 2000's it used to be a favourite of mine as I was able to make a bit of money out of restructuring CB's and issuing various structured products based on the company for my old shop. I guess it's easy with all the iPhone hype to miss the market penetration of Samsung smart phones. Samsung's operating profit hit a record for the fifth straight quarter, rising 88% from a year earlier to about Won8.8tn ($8.27bn), while revenue rose 18% to approximately Won56tn. Analysts reckon the handset business accounted for about two-thirds of earnings in the previous quarter. 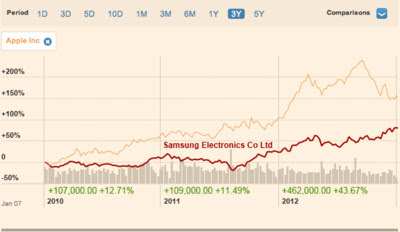 This is Samsung Elec v. Apple. Not as spectacular, but interesting nonetheless. The market is very long this stock even after its 46% run last year, so it would be best to sit back, do the numbers and wait for the moment. 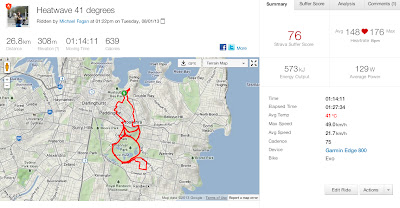