I wanted to get off Apple today but some news hit the tapes this morning my time. An updated iPad with 128 gigs will be available starting Feb. 5 priced at $799 for a Wi-Fi version and $929 with a mobile connection. Currently the top of the line iPads (with 64gigs) sells at $699 and $829. I'd have to look up the various component costs etc., but this is starting to crowd things in their product line up and I believe puts more downward pressure on margins. Also ask yourself this: how much storage do you use on your current Mobile device? The reason I mention this is I was thinking of upgrading my now ancient 3GS, so I was about to press the order button for the range topping 64gig model when I realised I only use about 8 gigs currently. I don't carry all my photos around with me, but I do carry all my music. So maybe 32gigs would be enough? I wonder how many people like me there are out there? Food for thought . . . #margins.

The Spanish province of Catalonia formally requested more than €9 billion in aid from the Spanish government liquidity fund overnight. Somehow I thought they needed  €7bn, but what's a billion or two amongst friends when you have the best football team in Europe to support. #marginalincrease

Of course part of the way the Eurozone hopes to get itself out of the debt swamp is via new taxes. Hollande is trying it in FRance and we know where that has gone so far. Within weeks we should have the revised draft of the proposed "Tobin" tax on financial transactions in the the region. The draft is being prepared by the EU tax commissioner Algirdas Semeta and it proposes a wider net by adding anti-avoidance measures to the original plan. Under the old plan many institutions would have scrambled for safe havens, but this looks like a no-go now. Leaked elements of the draft suggest a levy of 0.1% on stock and bond trades and 0.01 on derivatives and will be imposed on any transaction involving one financial institution with its headquarters in the tax area, or trading on behalf of a client based in the tax area. Semeta, a Lithuanian, like all good European leaders has limited experience outside the walls of  the public sector or academia and therefore fits in perfectly with the the technocrat takeover of Europe. His models indicate no drop off in turnover etc. from these new taxes and therefore they will raise about €35 billion. Good luck with that. #marginalreality

The US economy as I have been saying is starting to show signs of life. Durable goods orders rose 4.6 per cent in December, after a 0.7 per cent gain in November, the commerce department said on Monday. The market had expected a 1.6 per cent rise. #betterthanmarginal

A quick note for those of you who are expats . . . It's hard to quantify the time and expense of moving countries no matter how generous your employer; you'll always end up out of pocket. I must have changed 30 or 40 power plugs from european style to Australian in the last couple of months and I still have spare Swiss and UK power boards setup for those appliances where the AC adapter is an integral part of the plug itself. A new one hit me over the last couple of days. The last of the printer cartridges I had for my HP printer ran out and I took a trip to the local supplier only to find out that HP printers are regional specific. He could sell me a cartridge to fit, but I would need to call HP to get a code in order to change from European to Australia-Pacific so the local cartridges would work. This is annoying to say the least. More annoying was the fact HP in fact couldn't get the input menu for the code system to work under Mac OS 10.8 and therefore they are sending me a replacement printer. Thank you HP, but why do you have this stupid regionalisation policy anyhow?  The obvious answer is so they can have higher prices in some regions and therefore protect their and their vendors margins. No other printer maker I can find does this. It's crazy. #marginallystupid

The rain has no gone from Sydney allowing me the chance to ride again. It was cloudy so I rolled up my rain jacket and took it with me this morning as I snaked among the hills of Sydney's wealthier streets. One street that is a bit of a challenge is Latimer Road. I had a friend who lived here when we were growing up and it's one hell of a climb when you're ten and just missed the bus home. 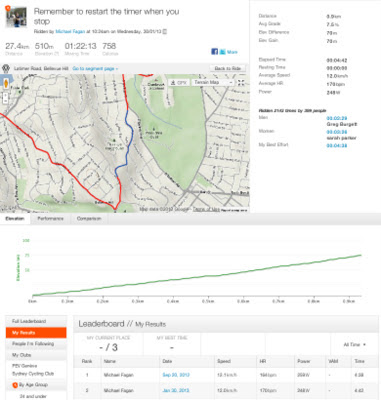 As you can see from the Strava segment read-out Latimer is only a kilometre long, but it averages 7.5º with two short flat sections and a nasty 11º piece towards the 2nd roundabout. I haven't taken it with any gusto so I'm hoping to improve my time quite a bit when I'm in an attacking frame of mind. Try it next time you're in Sydney's eastern suburbs.