When I mentioned the Kospi Index Futures trading error on Thursday I didn't expect to get the reaction from readers and casual googlers that I expected. It would seem that the merest mistake at the moment is likely to cause speculation about funds or other financial institutions closing down. There's a lot of unemployed pro traders out there happy to leap on things. After reviewing the stats regarding daily readers early this morning I decided to avoid quick conclusions and head out on the Cannondale for my first formal "bunch" ride with the Sydney Cycling Club (SCC). 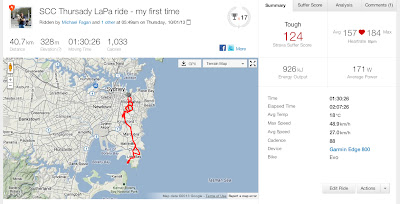 As I've said on this blog a number of times Sydney roads are not renown for their safety for road bike riders. Most serious riders here are up at dawn and aim to be off the road by 0730hrs. SCC takes safety very seriously. I learnt this pretty quickly when I strayed out of lane on a roundabout in Malabar. I thought the ride captain was a bit over the top given their wasn't a car on the road . . but so be it and I'll be more conscious of it next time. In my defence I have to say that I did join the "steady" group which is supposed to be a little more evenly paced (i.e. slower) than group 1. I think I was probably the oldest and the heaviest guy in the bunch, but honestly the average speed was probably a km or so higher than I'm used to over this distance and I was probably lucky that the course had less than 400m of climbing. I got some support from a couple of lighter guys who were pretty effusive about the pace line we held along Anzac parade where we got into the mid 40's for a couple of km's. Well I guess I now know what is expected and I can ride accordingly. Feel free to check out the full details at my Strava page.

So back to finance. The news that Morgan Stanley was cutting another 1600 jobs, mostly from senior staff in NY put my pre-ride thoughts into perspective. The pressure on former 1%er's is enormous. I think a lot of guys are still very highly geared and if you're senior you probably have some type of family reliant on you for shelter, food and of course education. If 50% of those MS jobs go from the greater NY area they'll be a lot of private schools who'll suddenly have vacancies for the 2013-14 academic year. James Gorman (CEO of MS) basically said that this would happen when he took over and now clearly the board has given him a full hand to play with. Volumes are terrible and with some of the "fatter" margined products no longer palatable the only way to push up the RoE is to cut costs and as we know the major costs of an investment bank are its people.

So my pontificating on the oil price has preceded by one day a price target change in Brent by UBS. It would seem that in taking their Brent forecast to an average $107/bbl for 2013 (up $5 bbl) that they now see fundamentals only easing slightly while plenty of supply-side and geopolitical risks still abound. I haven't read the whole piece, but to me this almost says ".. look we just think anything can happen so we'll put the target around where the spot price now is and hope we're close." Maybe that's a little unfair, but it sure reads like that.

A friend asked me about the JPY. I hate trusting the BoJ, I mean how can you after nearly 20 years of getting it wrong and trying to cover cracks in its not so splendid walls. I'm sure HF world wants to reverse the short trade it has held for so long given the recent move in the currencey. The locals of course are behaving as you might expect buying properties (TSEREIT), banks (TPNBNK). JGB yields have hardly moved so far . . . the battle will be long and I fear the BoJ may get on the wrong side of things as usual.

Back here in Australia retail sales declined for the first time in four months in November.  Sales dropped 0.1% to A$21.5bn from a month earlier, when they were unchanged. The market didn't expect this and I be the RBA will look at this and the Xmas numbers and decided to drop rates again. If they do then the pair to watch will be AUDJPY as both banks will be in losening mode and the FX guys will quickly judge who is the more credible.

Finally one hot topic on the street is the new lows being set in volatility across a variety of indices. The Vix, or as the press all like to call it: the "fear index" . . .  hit a new 5 1/2 year low. The implied central bank put and a sea of cash waiting on the sideline is most of what you need to know. Of course as a pro this =type of signal should have you asking can it continue? What could change the situation? Think about it this way; we have the looming fight in the US over the debt ceiling an event that last year would have seen traders literally running for the exits and buying as much protection as possible suddenly having no negative mathematical effect of the market. There is now a comfortable bullish consensus amongst investors, with bears having given up back in August when Draghi said he's print until it hurts or the Germans invaded the rest of Europe . . .  whichever came first. 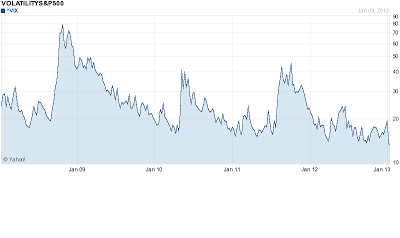 By the way, this is the VIX. Notice anything interesting? Do you see the patterns? I reckon you may see seasonal lows in February and then a rise. Watch the space carefully.