The Press are going to town on Rio Tinto. The advice level is very high and there's more than a dollop of nationalism mixed in to the conversation. I don't thing anybody in the funds management community in Australia fully understood the creation of the dual listed company structured put together by a Macquarie Bank wunderkind back in the 90's. Infamously of course that same Mac banker later got caught out for insider trading when KPN took over the then Australian company TNT . . . but that's a story for another day. The WSJ's Australian Deal Journal  chose to lead with the details of a piece put together by the Commonwealth Bank which called for:
Point 3 is the key for Aussie shareholders who have had to play a game of supporting the UK line of the stock by allowing RIO to run a test of equality between the two even though the Australian line trades at big premium to the UK line. Clearly, as I said in my last blog, the pressure is on for the company to repatriate fully to Australia and start paying out the franking credits against special dividends etc. The Comm Bank piece clearly implies this.

And so to my favourite company on the planet. Proving that even the best and the brightest of industrial leaders can get it wrong Caterpillar announced over the weekend that take a $580 million writedown after discovering accounting “misconduct” at a Chinese unit acquired last year. Apparently managers at Zhengzhou Siwei Mechanical & Electrical Manufacturing Co. who were the culprits. The statement said they'd participated in “deliberate, multi-year, coordinated accounting misconduct”. The leaks around the statement also implied that these were relatively new employees at the group or i.e. not really CAT people. I guess thats better than the billions RIO have written off.

The cycling season has now officially started and this week we'll get to see the guys at the Tour Down Under. I was scanning the maps of the rides and for the pro's there's not many real challenges with the majority of legs being what by European standards considered rolling country. Obviously by my personal standards the should be considered mountainous! So the Prologue was a Criterium in the centre of Adelaide on Sunday and it came down to a sprint between the Gorilla Andre Greipel and Matt Goss with the big German taking the prize. Here's the action via Orica GreenEdge's backstage pass:

Finally a quick note from me regarding an equipment failure. I managed to crack open the body of one of my Look Carbon Blade Titanium Axel Pedals. This makes the pedal next to useless and I found out as much in light rain here on Saturday when I rode out with my sister in law on her maiden ride on her new Bianchi. No idea how this could happen and I intend to send it back to Look for examination. 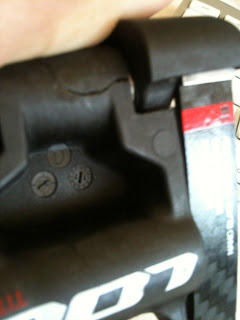 A new set has been duly ordered for the princely sum of AUD242 dollars from an online supplier.