Anything is possible, but is it likely?

Sydney's roads are getting back to normal after the vacation and now I have to struggle out of bed shortly after 5am in order to avoid the various tradesmen making their way from the outer suburbs into the strip of suburbs running along the coast. I think if you live exclusively within Sydney's Eastern Suburbs that the thoughts of financial doom seem only a remote possibility. The only sign that things are not was they once were are the numbers of bankers and financial planners "taking a break" to look for new opportunities.

In the US the Republicans have started to steel themselves for a fight on the debt ceiling. I believe they will cave on the ceiling if given a chance to show the rate of increase is slowing. It's calculous for a world of straight line geometers. Obama clearly believes his administration should maintain their hardline and repay Republicans for last years "round 1". In my mind Bernanke has already indicated that he'll take appropriate action if called upon. Volatility should increase from the extreme lows we have seen.

Japanese volatility has been making a come back of late. As I write this the N225 is down 1.8%.  It could be a classic case of buy the rumour and sell the fact. The locals are blaming it on the debt ceiling negotiations, but to me it smells slightly of a market that got ahead of itself. The N225 still has room to move higher even if I don't believe in Abe and the BoJ.

Obviously this nervousness has led to a rally in the JPY. It's understandable given whats a play and some HF's who bet on a reversal last week should have done nicely out of this. 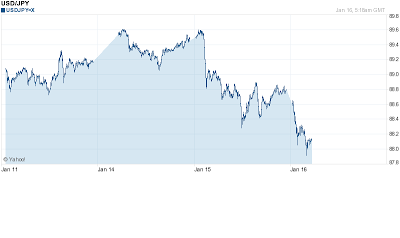 Profits are there to be taken and I wouldn't expect HF's starved of returns to run this one to long given the mood of the US President.

During the last few months we've heard from the Greeks (as usual), the Irish and now the Spanish. It smacked of desperation:

“I think that in this moment, when there is a need for growth, those who are able to implement growth policies should do it,” the Spanish prime minister told the Financial Times in an interview. “What is clear is that you cannot ask Spain to adopt expansionary policies at this time. But those countries that can, should.”

Economic data yesterday suggested the German economy grew 0.7%, down from 3% in 2011. This means that the economy actually contracted in 4Q12. Maybe the Spanish expect the Germans to do something to save themselves from dipping back into recession. Of course the Germans themselves would prefer a weak Euro to to trade themselves out of the situation.

Other than the odd email regarding the Apple share price (now $485, down 3% yesterday) I received some questions in regards to riding on carbon rims (such as more Campy Boras). For a start I'm no expert and I'd ask you to speak with a serious serious race rider before committing to a pair of these or other carbon wheels. I'd make the following points: