Houston we have a problem . . . 70% of funds held in ETF products globally are run by just three companies: iShares (owned by BlackRock), State Street and Vanguard. The market is worth about $2trn. What if one of the majors had a problem? Do you see where I'm going with this? You see just this last week BlackRock got control of another small chunk in the guise of Credit Suisse's ETF business without so much as a whimper by any regulator. How can this happen?

Leaving aside the ETF market there are only two things on peoples minds today. For investors it is that Apple now looks certain to break the $500 mark; for cyclists it's Lance Armstrong and his confirmed confession intentions.

Apple . . . get ready to catch the falling knife because we're within sight of the area I have said for a while makes the stock attractive again. It looks like channel checking by analysts has revealed (via the WSJ) that Apple had halved orders for iPhone 5 screens from suppliers for the period between January and March, to about 33m displays. The bulls will say that this suggests an iPhone 6 or at least a 5GS with a different size or type of screen. The bears will point back to October when Apple warned that margins (and maybe sales?) we're being compromised as mobile technology starts to converge. You also have to remember that Samsung and others are starting to get their act together with smart phones and I believe that the core franchise now with Apple may move towards the iTunes distribution platform and slightly away from hardware.

Of course Apples fall and the cyclical switch signal something we haven't seen for a while and thats a breakdown in correlations. I haven't looked the the various stats as it's been a while since I had access to some of the correlation trading markets. If that continues I'd be tempted to reverse into some vol trading opportunities. You want to stay away from longs in the various indicies, but I'd look at individual vol opportunities in stocks and be prepared to switch long holding into upside calls to protect from a down move. This idea of taking cash off the table could, for the bulls be supplemented by a leveraging effect of buying more notional value calls then stock you sell. Worth looking at in my oppinion.

I didn't mention it yesterday but the one thing that has spooked me was the UPS / TNT merger failure. The risk arb guys obviously got hurt. A 42% fall in the TNT share price will tell you that the long TNT / short UPS trade was on the books in size. It's amazing that the competitions authorities in Europe can take a hard line on this stuff but (and returning to my opening thoughts) fail to raise if an eyebrow at the thought of an ETF market compressing fast to less than a handful of major players. The only consolation I have from the deal is that part of the reason this happened was Fedex's refusal to play ball. If it had been a loss of confidence by UPS then I would have started to have the wobbles over the recovery in the US and Europe that we're just beginning to feel. Remember the how the old saying goes . . . it's the Dow Transports that lead the market.

Lance Armstrong . . . mmmm??? Cycling's own systemic risk? As a cyclist with nothing but the love of the sport at stake I believe that if he confesses the authorities of not only cycling, but also of all sports have a golden opportunity to take action. It's amazing how the NFL for example continues to avoid the many questions in it's own space while continuing to gain popularity. In Australia the tax laws are written like the criminal conspiracy laws, i.e. the law looks at your intentions, rather than at strict numbers to decide whether you're guilty. We the public might be better of if sportsmen cheats are treated as conspirators. After all with sports betting continuing to grow an un-level playing field is similar to theft and needs to be treated as such. I have my doubts over much of the athletics world, weight lifting, swimming and the major codes of oval shaped football played around the world. Additionally you only have to look at the many 50 year old plus hollywood stars sporting a chiselled six-pack now days to know that in all likelihood these people are also using some form of recovery enhancement in order for them to train for 4 hours a day for 6 months leading up to their latest action movie. I'm not a tin-hat wearing conspiracy theorist, but sometimes what you see in front of you is too good to be true.

On a happier note I took the Pinarello out for a ride today along the beaches of Sydney. I have now abandoned the use of the EAston EA90 SLX's as I've passed those to my sister-in-law. Instead I feel confident enough in my support team and a can of Vittoria tire sealant to be able to ride out on the Campy Bora tubulars. I've finally come to the conclusion that even if the Pinarello is a beautiful looking ride there is no way that it's as fast as the Cannondale Super Six Evo. What I would like to try is that same set of wheels on each, but because of some minor differences I can't as I'm not confident enough playing with the spacer setup that I have on the Cosmic Carbone SLR's to try reconfiguring myslef. I went to a local bike shop here today to discuss doing this and I came away thinking it's probably easier to hand it over to an expert rather than play with it myself. While I was there I also checked out some Mavic R-Sys SLR's. These R-Sys wheels are relatively new in the Mavic line-up and sit just above the Kysriums. The main difference seems to be in the bearings, where the R-Sys uses QRM SL (Qualité de and have tighter tolerances for optimised rolling efficiency. I believe the spokes are also different and stiffer . . . the end result is that for a around 400 bucks more you get a stronger, lighter wheel . . . but honestly will I notice? Maybe. It's fun to try though.

Finally we got to see the newly redesigned leaders jersey's for this years Giro d'Italia. Paul Smith of the ubiquitous multi-colured stripes is the man behind the simplification of this years shirts. I think getting rid of the multi-panel effect is a winner, even if I do own pink, red and blue jerseys from 2012. See what you think: 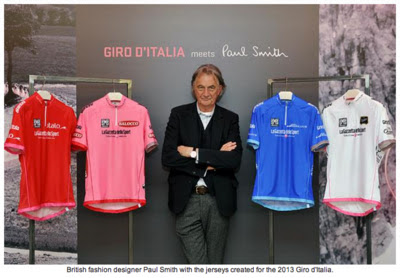