I didn't write a blog yesterday as I decided that given it was my birthday I deserved a day off from all things financial. I really enjoyed the day which included a late morning ride in Sydney's Centennial Park with my wife and dinner with friends. Among surprises on the day was a box from Cicli Mattio in Italy which I guessed due to it's lightness must have been a birthday t-shirt, but turned out to be something far more exciting. After nearly a year since I ordered my Cannondale Supersix Evo Team I finally received my compact spider rings and they truly are beautiful: 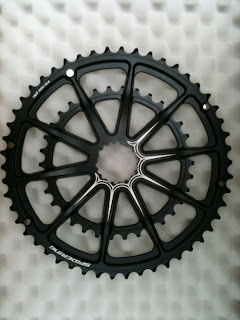 I haven't weighed them yet but when I say they are t-shirt light I am not kidding. I won't add them to the bike unless I go to Europe this year as I think the hills of Sydney can be easily tackled with the standard 53/39 setup. My real present on the day was a new set of training wheels thanks to my wife. I should receive these beauties next week:


Fulcrum Racing Zeroes Dark Label. It was toss-up between these and some Mavic R-sys. Mike and the guys at Atelier de Velo convinced me on the basis that they all rode these and the ceramic Ultra Smooth Bearings (USB) are the same as I have in my Bora One's. Originally I was going to order them from an offshore supplier and set them up myself. That would have been OK with the setup on the Dogma, but because the Evo has the non-Campagnolo rings up front you need to play around with a couple of spacers. I reckon me getting it wrong and having to take it in and pay AdV to fix it is probably worth 100 odd bucks. I'll post pictures next week.

I'm thinking of loading the new wheels with some serious rubber. Tyres of choice could end up being Vittoria Open Pave Evo CG Clinchers. The reviews are excellent and these are 24mm and can be inflated to 130psi. We bigger riders get more out of tyres if you can get them up over 120 with confidence. Thats why I find tubulars so much better than clinchers. Here's what the Vittoria's look like: 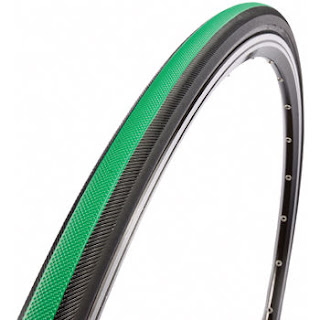 The green strip is cosmetic but should look good on the Cannondale.

So to finance and the Australian press is its usual bubbly self. BHP report record Iron Ore Shipments and that they were now at full capacity in Queensland coking coal. The cyclical rally seems to be good still and until we hit an air pocket during the negotiations over the US debt ceiling there's not much to stop it continuing. I noted in Murdoch's Australian today that ex-ASX supremo and old school stockbroker Maurice Newman had an opinion piece on the "global ponzi scheme". It seems that Mr. Newman is concerned with the unlimited amounts of money being printed by Central Bankers. Welcome to the club Mr. Newman.

Elsewhere another derivatives selling scandal has reared it's ugly head. One of the great names of banking Monte dei Paschi di Siena has had to open the books before their intended capital raising and in doing so has exposed a couple of dubious deals done to prop-up the balance sheet thanks to the investment banking teams at Nomura and DB.

It's said that they'll book a loss of 220mil v. the 2009 accounts. This readers is all about the back book accounting . . the board is claiming these deals were no approved, but someone at the bank wrote the ticket?? There's no doubt that these positions have been sitting there in dispute for sometime, probably being marked incorrectly. Remember what I've said about this sort of thing in connection with other banks? In the case of Citigroup the management of the back-book was crucial in bringing the new CEO to power. The opposite to things being marked in your favour is in the derivatives world when you have to mark them against yourself . . . in other words not everyone can be a winner.