The back book and cycling in 46° Celsius

Friday: I did a 33k ride in Sydney at an average temperature of 40° Celsius but it was at least 46° as I coasted down the final hill towards my house. For my US friends that's 113° Fahrenheit . . . yikes!. I stayed out too long and was lucky that I was wearing my lightest weight cycling jersey. I made 3 water stops and had to drink a litre of the cold stuff from the refrigerator when I got home. 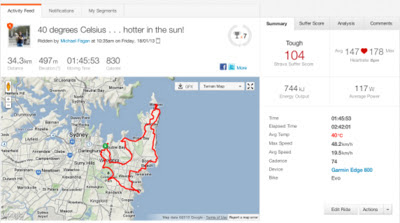 ON a day like Friday something always goes wrong. I managed to drop a chain when I erroneously back pedalled as I pushed off from a water stop a Watson's Bay. 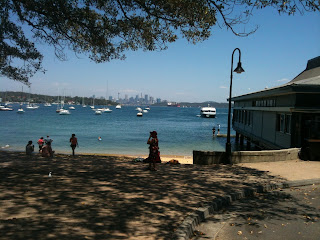 I also manged to clip one of my carbon water bottle cages going up a short but steep climb. The cage is a write-off, so thats 60 bucks down the drain. Luckily I have a spare one, but given how this is the second time I've managed to do this I'll be replacing the cages with the Arundel Mandible Cage as it's the one people now recommend. I'll review it when I get around to ordering them. 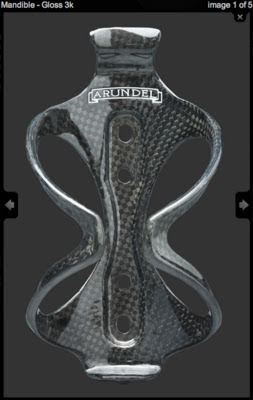 On Thursday Citigroup reported. I f you remember my previous blogs you'll know Michael Corbat got the job of CEO by managing the "back-book", I wrote about this last year when the board appointed him. Citi reported quarterly earnings of 69 cents a share on an adjusted basis. Analysts had expected 96 cps on this basis. I found it interesting that Mr. Corbat's old fiefdom at the bank released only $86m (v. $1.5bn in the previous year) because regulators have expressed concern that some banks have been too aggressive in releasing such reserves. Anyone who's ever worked on a bank's "distressed" assets knows that the easiest thing you can ever do is mark-up an asset from say 10 cents on the dollar to 20 cents on a dollar on the basis that you found that a similar asset has traded away from you at 30 cents on a dollar, The hardest part comes when you've marked it all the way back up to the 80's and you realise you either sell it now or risk having to manage it until maturity during which time the releases become smaller and your own P&L and therefore influence within the bank starts to wane. Mr. Corbat got out of bad asset management at the peak of his influence and as I said at the time he probably knew the hard slog in the group was only just beginning. He now has to manage a bank the hard way and from this first bit of evidence he has a Herculean task ahead of him.

Bank of America also failed to hit expectations mainly due to the mortgage mess that is at least finally being cleared up. The market of course expected that BoA would buy back shares or return capital in another for, but the Fed as was the case with Citigroup is not going to be as lenient on such capital structure changes until the government has milked them of the cash it believes the mortgage consumer is owed. Fair enough, but I'd be looking toward significant dividend by the year end.

Finally a quick word about Friday's move by Rio Tinto to ditch CEO Albanese. He gets nearly 20bucks large to spend how he sees fit and no doubt will have plenty to offer business schools regarding buying assets during a bull market. I am stunned, yes stunned that they promoted Sam Walsh to run the group, not because he is a bad manager or person, but rather it's a complete surrender of the expansionist policies that this board has espoused for at least 15 years.


The board should en-masse offer themselves up for re-election at the next AGM. I now believe that the Rio UK / Rio Australia share class arbitrage will come back into play. If RIO retreats to a perth base then I expect them to collapse the UK HQ if possible and return to a single Australian listing. Maybe they could even drop the RIO name and rebrand as CRA (just kidding).