As I write this the Shanghai Composite has regained the ground it lost on Friday. Iron Ore you see had fallen about 2% on Friday and if you remember this blog's recent posting regarding the correlation between the iron ore price and the Shanghai Composite (SHCOMP) then this, the biggest fall in the commodity since September 24th had caused a momentary crisis of confidence. No matter now as the market has taken the Chinese inflation numbers as being more important. Confusion continues. If you're already switching out of the yield stocks into the cyclicals than you like the Chinese inflation . . . If you're staying put you probably see a tightening of policy.

On Friday I had headed out on the Cannondale I had been pondering the news of which is more important: The Japanese stimulus package or the earlier than expect Q4 result released by Amex?

I'm not sure what's happening at Amex. The early release of the result spooked some people. Profit fell 47 percent in 4Q to $637m. $400m pre-tax charge on 5,400 layoffs, 8.5% of workforce. If you take away the restructuring expense then the stock beat the analyst f/c by 1.09 v. 1.06 expected. The funny thing to me reading through the release is that it would seem that they probably should have done this earlier as many consumers (including myself) have switched over to electronic statements making a lot of processing etc. redundant. Not important.
I think the Japan Stimulus was important, even though I remain a radical skeptic regarding anything that happens economically in Japan. At the core is a Y10.3trn package that Abe's new government says will lift the country’s GDP by 2% and create 600,000 jobs. Japanese debt is already 220% of GDP and the country has had 5 recessions in 15 years. There is absolutely no empirical proof that this will help. The basic facts are that an ageing society with low birth rate is producing too few new tax payers and far fewer entrepreneurs able to create wealth that will benefit the Japanese nation. Of the 10.3trn roughly a third will go towards rebuilding the Tohoku region and strengthening disaster prevention. The region of course was stagnating before being hit by the tsunami and to me the rebuilding has very little to do with a reasonable investment, but I won't win many friends for saying that so let's not go too deep here. Once the market realises that this package will be nowhere near enough as it lacked the Draghi "whatever it takes" clause the JPY will rally again. It will be at that stage that things may get really interesting. Will the Japanese buy European and US debt in an effort to debase the JPY? Is this 2005-06 again? 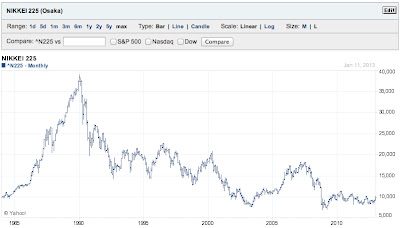 I think is probably more like 2004-05, a rally underwritten by monetary policy. For the 2005-06 scenario you'd need a lot of re-leveraging amongst consumers.
The good news in the banking space in Europe (see last Monday's blog) has hit a small hurdle. Someone at EU central is re-floating the internal paper regarding country responsibility in the case of bank failure. Clearly ever since the ESM got a boost from Draghi the thinking has been that Europe was moving towards a single banking market where in the case of disaster the ESM would step in and assume responsibility, but clearly this is not everyone's plan. The idea is that countries are still responsible for financial institutions, even though they would be regulated from Brussels. The obvious conclusion is some countries (PIIGS anyone?) might now want to increase the insurance burden on banks in order to mitigate possible disaster scenario. In a way this becomes a reversal of what we just saw with the changing of the Basel III targets. What a mess. I think it shows the Germans (and the Dutch, etc.) are not fully on board with team Brussels and as such they are going to look at other ways to avoid another situation where they have to pay for other's mistakes. The canary in the coal mine on this one is Ireland who will run out of funding for their banking system without relief by November. Watch this space.
Highlight ride of the weekend was my 55km beach ride here in Sydney on Sunday. A great morning, even if it was a bit cloudy. The Cannonade was humming and I felt quite good. I didn't set any records, but sometimes you have to give yourself a break from hammering the pedals and sit up and enjoy the view. The only problem with Sydney at the moment is the return of the vacationing families. More mum-buses are back on the road as the school holidays hit their final 2 weeks. The problem is that kids activities are back in vogue as local sports centres (such as tennis clubs) have various camps ready to free up time for harassed parents. So be it.
I managed to watch the Australian road race championships on Sunday. Luke Durbridge took the title from an early break away. All the time I thought he'd get caught. He must have ridden the last 12km's on his own, which unless your Tom Boonen usually ends in disaster.
Nice ride.
Ciao!
Posted by Mike Fagan at 05:56