It's great time to be writing a blog on cycling and investing at the moment because two of the worlds biggest and most important conventions are on at the moment. I think I'm more excited about Eurobike to tell you the truth, though the two events are quite obviously not mutually exclusive. 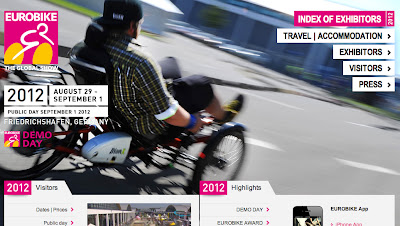 Everyone is excited about hydraulic braking on high end road bikes. I'm not as excited as the jouno's and product pushers. The Brits will especially go nuts if they get a good working and aesthetically pleasing version(s) because of the simple fact that they seem to spend about 80% of their quality cycling time riding in the rain. I didn't do much wet weather riding in Switzerland for the simple fact that believe it or not the climate around Geneva is pretty damn nice. In winter you got snow, but it usually fell for a day or two and then the sun came out and the clearance trucks had done a great job on the roads. When I did ride in the rain I usually rode with aluminum rims (Easton EA90 SLX's) and really didn't have much trouble stopping from normal speeds (approx. 30kph). Down hill can be more problematic, but even then so long as you had a good attitude and gave yourself some time stopping from 50kph it wasn't that hazardous. Clearly if I was on one of the busier secondary roads rolling along in the Cotswolds in the UK while in the middle of a century ride and I had some traffic then I might be a little concerned. Now on carbon rimmed wheels, such as my Campagnolo Bora's you have a little bit of a problem. You have to pump the brakes, like the ABS does on your car, that then acts like a squeegee and drys the surface beofre engaging properly. At 50kph down a hill and approaching a switch-back that's not a lot of fun. So I can see some upside to hydraulic disc brakes for the all weather pro-racer, but for me I might just modify what I have.

In the Eurobike 2012 awards I noticed that the winner for best component innovation was Magura of Germany who now offer hydraulic rim brakes. The citation reads:

A revolution in braking systems for triathlons and time trialing. The world’s lightest and quickest hydraulic rim brake. Its braking strength and good modulation set new standards in triathlon and time-trial machines, thus enabling effective speed management on descents and before curves. It features four key performance factors: high braking power, fine modulation, light weight and an aerodynamic shape that was optimized in a wind tunnel.
Jury statement: “This hydraulic racing bike brake system makes it possible to stop on a dime, which is particularly important for time trialing and in triathlons. Its light weight is also unbeatable!”


I think it's interesting and pretty cool. If you've ever done some time on a time trial bike you'll know why you might need extra stopping power. As I told a mate in HK, don't by a TT or Triathlong bike unless a) your a very good rider and b) you a competiting in proper races that mean something as there's every chance if you ride to work on one that they'll be scraping you off the road within a week.

For the record the best road bike of the year award . . . Cannondale Supersix EVO:

The SuperSix EVO is a road racing machine. It is the perfect blend of all the key performance factors: weight, stiffness, strength, compliance, handling and aerodynamics. The EVO was designed for serious road racers and breaks the mold for elite racing machines. It is extremely LIGHT – at less than 700g, it sports the lightest production frame in the world, extremely STIFF – it has the best stiffness-to-weight ever recorded, an incredible 142.3 Nm/deg/kg and extremely STRONG – it even outperforms most aluminum frames in destructive and fatigue testing.
Jury statement: “It is one of the lightest production frames in the world, absolutely safe with great handling stability. It sets new standards for what is possible that will be almost impossible for the competition to beat. The Evo provides a perfect ride, and that’s worth Gold!”


Sometimes people make you stop and think and even if you don't agree with them you can often constructively challenge your own views enough to drive out hidden value. Just listening to an old friend over a coffee was very constructive last night. Without going into the details it got me to examine yet again what we've been seeing in markets and although some of what I am going to be writing today will seem obvious to many of you, other points might not be so.

2012 has been a year where search for yield has been the dominating theme. With the baby boomer generation now dominating much of the worlds financial resources it's understandable that much of the "me" generation wants to kick back and enjoy life . . . which means living off investments. Ironically of course it is the bubble cased by baby boomers that has left us with a downward spiral in the savings rates and a bursting of the housing market (their primary nest egg) that has brought us to the edge of a metaphorical fiscal cliff. Therefore what has been the reaction? Well for a start central banks have swamped the world with cash in order to re-inflate markets.

QE, QE2, Operation Twist . . .all of these have driven down rates in order to push people into riskier investments at the wrong time of their lives. We now have negative yields in Germany, Switzerland and some other nations. The investment grade corporate market is also seeing new investors flood in. How can it be sustained?

In 2Q12 we saw many "misses" from the income or sales components from significant US companies that we would expect to benefit both from low interest rates. If sales growth is slowing then its probably likely that the bottom line, the area from where yield is derived is also likely to slow. Luckily though for many investors back in equities since Operation Twist was instituted the total cash on hand at companies is near all time highs. Obviously one should strip out some outliers such as Apple, because the likelihood that they reach the status of "income" stock is a little ways off currently. Having said that there is cash enough to return capital, only the financials remain with the problem of sucking in more equity in order to meet Basel II requirements.

Equities weightings remain quite low within portfolios. And I agree that this is a very bullish thing if rates remain where they are. That is why Jackson Hole is so important . . . equity investors need rates to continue to be pushed lower. The low volumes of the spring/summer rally are indicative of much regular capital sitting on the sidelines. The trouble for me though is that with a hard pressed deleveraging consumer and a slowdown in emerging markets such as China and Brazil we are relying on the great fool theory in order to achieve capital gains. I'd be less of this view if I saw top line growth.