Soy beans are now trading near $17 bushel thanks to the US drought. If the Brazilian and Argentinian's don't come through on the crop front this is going a lot higher and if that happens it spells big problems for China.  Sometimes I think we've forgotten how good the agricultural space has had it over the last 5 years. Take machinery manufacturer John Deere: 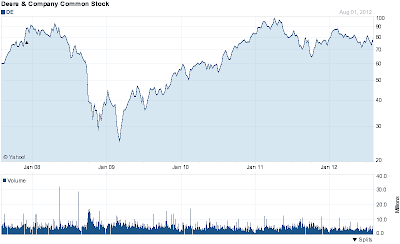 DE has doubled its earning from 2010 to today (approximately $4 to $8 eps). All good things come to an end and if farmers hurt by the US drought pull back on orders then I wouldn't hope too hard for the Southern Hemisphere to bail out earnings at this very good company. DE and CAT are similar in that they're both extremely good companies who've ridden the boom in text book fashion, but they can't avoid a hit in a slowdown. I don't like shorting good companies, so look for competitors with structural problems to liquidate from your portfolio first.

In terms of the cycle take a look at the below chart (via the FT). It summaries the net PMI results we've been seeing. Clearly Asia is now starting to feel the pinch because of weak demand for Asian (including Chinese) exports.

We won't be getting the massive 2008/9 stimulus in China to help us out this time. The Chinese now seem to me committed to engineering something one step up from a hard landing and nothing more. If they get hit with food price inflation all bets are off and money will be going into food subsidies, not into constructed condo's in Shanghai. 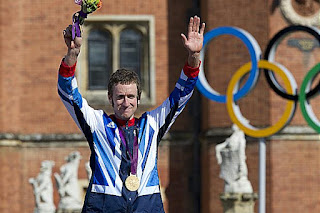 Wiggins was fantastic in the time trial. To put 50 seconds on the silver medalist Tony Martin (GER) was truly astonishing. I guess I can only wonder what might of been if he lost. Would Britain have abandoned cycling overnight? Would hooligans have rampaged through London attacking Boris Bike stands? Thank goodness he's such a good rider.

Bad luck story of the day was Sammy Sanchez of Spain who lost a chain shortly after the start. Sammy is a favorite in our house after the way he rode the 2011 TdF and claimed the climbers polka dot jersey.So remember next time you head out on a ride that even the pro's have equipment failures.