The setting sun and and old friend returns from vacation . . . . she's baaaaaack . .

For the quarter Japanese GDP grew at an annualized rate of 1.4% v. expectations of more than 2%. So, it's official that Asia has slowed significantly. The Yen has rallied 6% this year and that spells problems for Japan. On top of that the Japanese government raised the sales tax to 10% from 5% . . . I don't see how the BoJ can have any confidence in growth. Japan remains as a country you don't need to be involved in . . .  sorry. 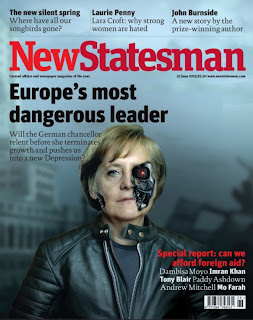 The iron lady of Germany returns to work today after two weeks walking in the Alps. I never really saw her as a walking type, but hey I guess she's entitled as she's sitting on a 2year high approval rating and can afford to play off Draghi against the Bundesbank and the German constitutional courts. It's interesting strategy as it allows her to play the good cop while letting the rule of law run it's course. Her instinct is to support Europe, but it's very conditional.  The European left and their Keynesian friends sees her as a destroyer, but they would, wouldn't they?

Elsewhere today in Europe I'm watching Italy as it attempts to sell E8bn in debt today. German and France also have smaller bond auctions. I wouldn't expect anything dramatic out of this auction, but who knows. My guess is European markets will be flat before the 10am auction and rally unless it's a disaster.

Bank Julius Baer is buying the ML private banking business ex-US for about $1.5bn and to finance this it is raising $766m via combo of hybrids and shares. I've written about the need for many of the European banks to raise capital sooner rather than later, so I'm not surprised that the Baer is doing a simultaneous raising to pay for this acquisition. Why aren't the majors (especially DB) raising cash at the moment? Are they hoping that the Germans won't challenge Draghi's intention to write a blank cheque on the German savings account? The world will be awash in bank shares by the end of the year and it just can't be ideal to be last to hit the go button.

I hate solar stocks, not because I hate solar energy, but because their business model is so reliant on subsidies by bankrupt governments. Solarworld (-80% this year) has come out today and said it expects to no longer have positive EBIT this year. It was all summed up last month when Solarworld and some others filed an anti-dumping complaint against Chinese rivals with the European Commission. That's significant because Germany is one of the biggest markets for solar pannels and Spain is also very important. The Spanish cut their ridiculous subsidies long ago.

At least the Spanish have the Vuelta a España. My sneaky tip for a couple of stage wins is Alejandro Valverde of Movistar. I know that it would be hard for him to contend for the GC given that the current champion Cobo moved to Movistar this year and he is the declared team leader, but if anything happens to him it could be game on for my man. Obviously Froome is favorite at this stage.