In the middle of the fiscal mess that is Europe we have today more leaks regarding Bankers pay limits coming from (you guessed it) . . . Europe. If the moral hazard was the original bailing out of the banks and the subsequent unfeterted expansion of central banks balance sheet, now comes the retribution, only this time it comes with that familiar idiocy that only a "euro-crat" can create on his Blackberry while reading the latest Krugman op-ed piece on the beaches of the Mediterranean. There are two lines of attack:

1. Cap bonuses so as to create a an environment not conducive to casino like behavior amongst employees. The Euro thinking being that if you can only earn a small reward why take the risks needed to have a stonking good year?

2. Make all bonuses conditional so that if your strategies produce losses at a latter date you forfeit existing awards.

I assume in the latter case this is why DB has got on the front foot today and is saying that they will not only make their own bonus payments subject to this condition, but also payments made to compensate staff when they forgo un-vested shares from previous employees. I was confused on this one when reading the FT, because this what does this imply in the situation where a banker makes a transaction, then leaves a bank only to learn later that said transaction exploded? Does DB then say - "Hey that transaction you managed for Citigroup 2 years ago lost money, so we're taking cash from you? " Probably not - but it's not inconceivable is it? Imagine that . . . everything you do in your life gets challenged continually until at least 3 years after you retire. Worse still imagine who the people are always making those decision with hindsight?

In the meantime the banks will use these laws as they see fit. They'll first of all use the caps to cut cost ratios. Then they'll be creative and pinch other banks staff and transfer them to locations outside the capped zone. I mean how ridiculous is this going to be, especially if the Swiss don't sign up? My Geneva apartment will be renting for multiples of what I had to pay.

It's interesting when governments go into denial mode. I wanted to get off the topic of BHP's recent cancellation of the multi-billion dollar Olympic Damn project, but Australian Trade Minister Craig Emerson wouldn't let me. Dr Emerson has a PhD in economics so perhaps might be expected to have a more scientific approach to any analysis of the current situation? From what I'm reading his only evidence is projects already begun. Surely he knows that markets and dare I say it, economies are less interested in "past orders" and always interested in the "forward order book". Right now those forward orders are not looking so hot.

I know if I search the Australian parliamentary records hard enough I'd find the same thing coming from the mouths of a minister in one of the pre-Federation (1901) Australian state assemblies regarding the 1896 collapse of the wool and other agricultural markets. I'm no economic historian, but didn't a collapse in the Australian banking system in 1893 eventually expose the precipitous nature of the colonial commodities boom. Maybe, just maybe the same is happening in respect to the mining boom post the GFC? Perhaps Dr. Emerson should adopt the more reasoned approach of his colleague Resources Minister Martin Ferguson?

Another boom that is fast reaching a peak is the bond market. August so far has been a record month for corporate issuance world wide. Investors starved of yield and suspicious of the rally in stock markets have flocked to corporate bonds and away from the zero interest policies of their own central banks. It's interesting this shift given that governments world wide have attacked corporations for their greed pre-crisis while inadvertently pushing people to invest in them. This month corporations issued $120bn in bonds compared to an average (since records began) of $58bn. So is this a bad thing? Well if USD corporate rates (AA or higher) were say 9% that would be worth committing for a longer duration (say 5 - 10 years) as the long term return hurdle on stock market investment is roughly 9% . . .  or so goes the the old rule of thumb. Why then would you invest at 6% or so and lock yourself in to a non-sovereign exposure at this point in the cycle? Do you really believe that all this printing of cash will lead to zero inflation and lower corporate rates? Or is it that you believe that central bankers will bail you out, so investing in comparatively high end corporate paper will be virtually of sovereign quality? Wasn't AIG paper of that quality pre the GFC?

Anyhow what ever you're investing in be careful and always question the orthodoxy.

Stage 8 of Vuelta was a cracker (Saturday). If you haven't seen it check out the highlights. What we had we're three talented riders all desperate to hang on to seconds ahead of the time trial. 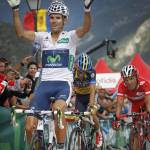 The commentators say that Froome packs a diesel engine because of the way he chases breaks on the climbs - he grinds away like a truck. He may not be the quickest to respond, but he eventually gets to them. Rodriguez and Valverde seem to dance on their pedals. Watch the way they attack the switch backs in apex. If you want to see what happens during a stage like this check out the behind the scenes video from Greenedge . . . .very entertaining stuff.