What does Ben Bernanke do when he wants to get away at Jackson Hole . . .

Do you think Ben Bernanke has been on the new Mountain Bike track at Jackson Hole? It looks like a lot of fun. I think the Chairman needs to let himself go a bit. Maybe he could get away with some of the gang and let his (metaphorical) hair down? It looks like Draghi won't be there, or if he is he won't be saying much . . . maybe he'd prefer to be on a nice new Colnago C59 going up the hill at Barolo from Alba for a moderate lunch of local delicacies? Who knows? One thing is for certain, the day is about to dawn and the Bernanke will don the familiar tweed jacket and head to the lectern and  . . .  probably disappoint.

In 2010 Bernanke came down like Moses and saved world equities markets with QE2. The August FOMC minutes fluttered like the wings of doves (pun intended), but brooding like Satan in Paradise Lost sat St. Louis Fed President James Bullard preparing to swoop down and take the prize away from man's grip . . .


Who first seduced them to that foul revolt?
The infernal Serpent; he it was, whose guile,
35         Stirred up with envy and revenge, deceived
The mother of mankind, what time his pride
Had cast him out from Heaven, with all his host
Of rebel angels, by whose aid aspiring
To set himself in glory above his peers,
40         He trusted to have equaled the Most High,
If he opposed; and with ambitious aim
Against the throne and monarchy of God,
Raised impious war in Heaven and battle proud
With vain attempt.
(John Milton: Paradise Lost Book 1)

Bullard (Satan in the eye's of many) saw the minutes as being somewhat dated given the stream of improving data that started to arrive through July and August. In fact this trend has continued. Now this of course leaves the doves exposed and not even with a host of economists led by the Archangel Michael does it seem likely we will reasonably get anything more than a bit more of operation twist. The rational will be that "twist" has broken the back of asset price deflation, so why stop now. 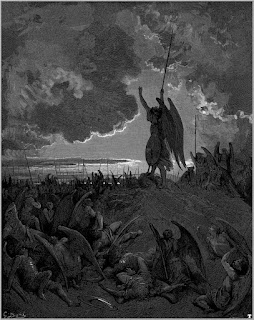 Enough of the extended metaphor . . . . where are we left? Europe has kicked the can down the road for the Grexit, Spain and Italy are fighting hard to have the ECB buy their dangerous paper and the French and Germans are at odds over who picks up the bill for it all. Meanwhile the Chinese store up powder for the next wave of food and possibly energy price rises.
Stay tuned and get your popcorn ready!

Given corn prices you better make sure you are hedged on that extra large bucket!


Meanwhile my favorite mining stock Xstrata has found yet another sovereign wealth fund willing to call Glencore on their attempted t/o. This time it's the Norwegians. When it was just the Qatari's trying to block the deal there was still some hope for the Zug crew, but now the Norwegians who are a little bit more astute in the way they manage things have chimed in with some support. Gelencore is offering 2.8 shares of itself for every Xstrata share and the boys from Oslo think 3.25 would be more appropriate. I am postive that Glencore knows it's getting a long term baragain, but feel pride is on the line and the CEO doesn't want to be seen as a shot term chump if things go south . . . especially in the copper market. Personally I'm a long term believer in the supply limitations of Cu and therefore can fully understand Glencore. Too bad for them that others are thinking the same way.

So in tribute to Bernanke and his big adventure I give you a suggested mount for the big man this week. It's the Cannondale Flash 29 Ultimate, complete with patented "Lefty" fork. It seems only too appropriate for a man of Ben's strong Keynesian leanings. 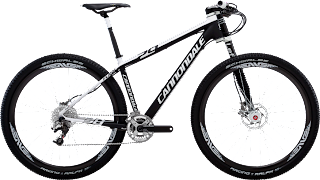 Fully loaded and ready to race, in back and white for Ben and maybe by special order with a little red flash for Professor Krugman.