It was 39 degrees in Spain on Sunday for the 2nd stage of the Vuelta a España. These rolling stages are never my favorites, but yesterday's final sprint got me interested. The Vuelta always seems to throw up some riders we haven't seen much action in the first half of the season. This years event is judged by commentators far more knowledgeable than me to favour the climbers. All I know is that if it's going to be 39 degrees everyday I'm glad I'm watching this from at home and not in the saddle of my bike.

The Euro-crats of course are loving the heat, it seems to give them lots of time on their Blackberry's and iPhones to speak to journalists. The leaks have sprung again and this time it's the old cap eurozone bond spreads idea. The funny thing is that they're talking about a cap on the spread, but the popular press immediately equates it to the mythical 7% line in the sand which is easier for the money honey's to explain to Joe Equity. This has been floated many times since the crisis started. Last November there were similar leaks.

Of course for those in trouble even a limit such a a spread cap would not be enough:

"There can be no limit set or at least (the ECB) can't say how much they will use or for how long," when it buys bonds in the secondary markets, Luis de Guindos (Minister of Economy and Competitiveness) told Spanish news agency EFE.

Well that's a plan I guess . . . just print cash. Mmmmmm .... right. I have this feeling that the crisis managers in St Tropez have been spending a lot of time reading about what happened in Asia in 1997-98. Back then currency boards became de rigeur. Everyone wanted to peg to the US dollar. The bond spread cap is is clearly a second derivative thinking of that Asia crisis reaction. The problem for Asia was to have an orderly devaluation of their currencies to encourage growth but also to limit the damage of a flight of capital. Sound familiar? In the case of Europe it's this currency piece that is missing. Let's put it this way, say I'm Spain, if I had the Peso I could peg it to the DM and print money to maintain the relationship, thus increasing the money supply in the economy and create an inflation that would be favorable to investment. I could then review and change the exchange rate when I thought the economy could absorb the shock.The Swiss for example are already doing a version of this in order to devalue themselves and regain the productivity levels they lost with an inflated CHF. The reason why I don't believe a spread cap would work, even if it got past the German's is that if the Spanish (for example) are continually selling bonds at a given spread to German Bunds they still miss the advantages of a currency induced boost in productivity which would bring back investment to Spain. All it does is keep the patient on life support so that the European banks won't have to write off huge losses. They need to devalue or make bond holders take a haircut (as they did with Greece) . . . oh, my what a mess.

This all brings me to to an interesting interview on Bloomberg Radio between Allan Meltzer  of Carnegie Mellon University and nattily attired host and Tom Keene. 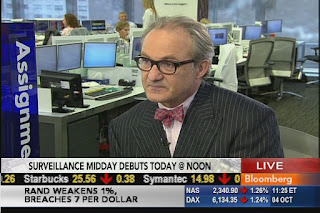 Professor Meltzer suggests that the Eurozone divide itself in two, that is into a high cost low productivity zone that can partly devalue in order to bridge the productivity gap and into a high productivity zone that needs a strong stable currency. He says he's put this plan to the Europeans in the past, but because most of the toxic southern debt is held in the north governments are afraid to act because they cannot predict with certainty the knock-on effect to their own economies. Mind you this plan sounds a lot like the good bank / bad bank idea, but let's not go into that again. Use the above link and listen to it for yourself.

On a lighter note comes the attached Youtube of Asahi's Tornado Beer Dispenser. I love the idea of this, but I didn't see the purpose at first. I guess it's meant to be a rapid form of dispensing drinks at large venues. If you're trying to get younger people to drink beer rather than those disgusting alcho-pops you have to give them a perfect pour. Anyone who's been to Japan knows that draudght beer presentation, unlike other product presentation in the land of the rising sun is problematic at best. The other benefits are that with a contracting population it makes more sense to introduce these quasi-robotic methods to make up for the lack of humans willing to take on the tasks. Oh and by the way this was a British invention and proves to me once again why the Brits will get out of their maliase and the Euro-crats will just blunder along. I mean do you think the French would ever invent something that would put an army of overpaid, under worked, rude Parisienne waiters out of work? Not on your life.