SME's are clearly hurting in the US. I think a lot people who watch stock markets forget that much of the job creation in the western democracies happens at the level of small business. I have never spent a long time contemplating the picks and shovels retailers to these job miners, but this morning I was listening to some interviews and the one that struck me as most pertinent concerned office supply company Staples. 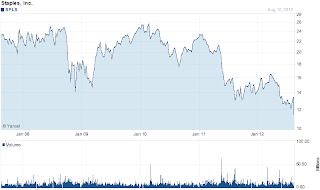 Staples stock is on a 52 week low  . . .  in fact its also a 5 year low and is in a space with at least 3 major competitors. One the major problems they have is that 20%+ of their revenues come from Europe. Unlike in the US or even the UK responding to a slowdown in the Eurozone is difficult because of the difficulty in laying off staff and shutting down larger branches (say 20,000 sqft+). This means of course that it is difficult to redeploy capital quickly to more profitable regions. In fact what Staples would like to do would be to downsize branches into a kind of Staples Express format . . . but that isn't happening. Why did I bring up this company if it seems such a basket case? Well for non-US equity people it provides an illustration of the pitfalls of the European exposure many globe trotting executives sought out in the late 90's and early 2000's. At the time no one could expand fast enough, just like no one could buy enough buy to rent apartments or take on enough leverage. Look, when things turn the survivor in the office equipment space will be huge winner and therefore keep it in the back of your mind.

Here's another great chart, it shows the Dow Transport Inx v. the Dow Jones. No traditionallt the saying goes that the DJI follows the DJT, but check this out: 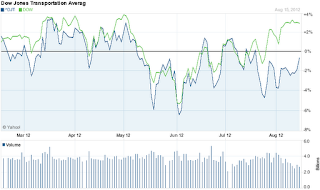 Very unusual behavior. It looks to me as though what we're seeing is very defensive rally. No one believes in the market an they're all crowding into basics, such a JNJ and utilities looking for a yield and low beta exposure to the fed pumping in cash. Either the DJT rallies or we're going to see a horrible bubble get burst in the dividend plays. Let's put it this way, what would happen if in the search of tax revenues the US decided to up the tax on dividends, say back to the level they were under Clinton? The div yield trade is crowded now. Maybe not as crowded as bonds, but crowded nonetheless.

What bonds? Have you noticed that the bulls are trying to say the stronger than expected retail sales and the increase in inflation is a one off and will not stop Bernanke from announcing stimulus at Jackson Hole? I have. It's building up to be quite a letdown and I think the bond market could be about to suffer a shock. Sure it will be sell equities first, but if the fed goes to neutral over the next 3 months Bill Gross and the Pimco guys will have got a huge call right.

I attended an interesting lunch here recently held be hedge fund, sorry alternative investment group who were presenting a couple of different strategies. I was fairly impressed by what I heard. The team seemed to have things pretty much lined up. I asked as many questions as I could without making a nuisance of myself. Generally I was happy with the answers. The market neutral fund they were showing was more quant orientated than I would have normally assumed. That can be reassuring in this type of strategy as you need to see some discipline so as to preclude the propensity of some fund managers "having a go". A couple of people asked my views afterward and I gave both funds I saw a "pass - revisit" score. If anyone wants to pay me to consult I at least feel like I might get my questions answered.

Want to see something special? I have my own problems with Cannondale at the moment, but I thought the custom bike they put together for US road racing champ Tim Duggan looked great. Red, white and blue is a classic. 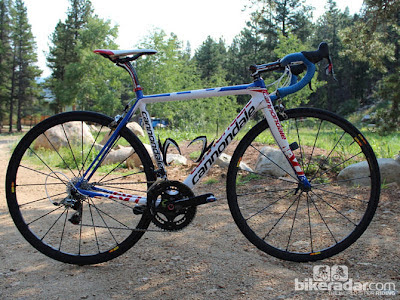 Check out the full set of photos at Bike Radar.

I nearly forgot to mention the results from the Tour of Utah a few days back. Johann Tschopp (BMC Racing Team) won and hopefully that will make up for some of the pain they have had to endure it what has been a frustrating year for the black and red. They had a moment in the sun early in the Giro, but the TdF was pretty abissmal, save for the white jersey.