When people say that the US housing market is coming off a low base I honestly get that; the point is that the momentum is there for all to see and even the Fed now must admit that they just might have done what they wanted and achieved enough velocity for this bird to fly without an up-draft. 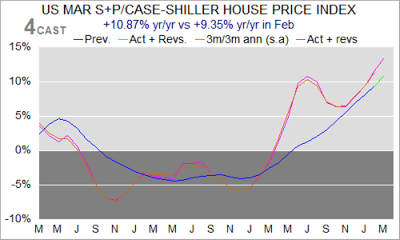 Of course this brings us to the method by which the Fed withdraws. The fear is as soon as they say they are going to buy $84bn of securities in a month, rather than $85bn that the market immediately collapses. That might happen, but I'm betting it won't. The Fed will in the next three months withdraw some elements of QE3 and with that will come the beginning of the end of the biggest bull market we've seen for bonds since WW2.

The scariest part of a bond market re-tracement is that four US banks: Bank of America Corp. (BAC), Citi (C), J.P. Morgan (JPM) and Wells Fargo & Co. (WFC) now control two-thirds of the banking assets in the United States. That spells danger in a falling market. The problem with "too big to fail" is that the Fed decided to take away all the mid-cap banks so as to replace them with a small number of institutions it feels they can successfully monitor and pre-empt for balance sheet problems. I hope they're right.

The IMF makes me laugh. They always seem to be slightly behind the curve on things. If the Fed is acting a "tad" too arrogantly in believing it can control institutions as they get bigger, then the IMF matches them on occasion for hubris. Today's example is the IMF's decision to downgrade their forecast of Chinese GDP from 8% to 7.75%. I'm not sure if 8% ever looked achievable except in a case where the government just pumped cash into the housing market with no heed paid to the damaging speculation and credit bubble in the sector. Look China is still an exporter and it needs the US to start growing in order to balance the internal economy. The best result for China is that US demand picks up and allows them to put the brakes on internal credit growth.

I'm sure there's been bankruptcies in Singapore, but none that I can remember involved a public landmark. The Singapore Flyer, the world's tallest observation wheel, has had some of its assets put in receivership. Ferrier Hodgson will be managing the process. The wheel overlooks the bay where they have the F1 Grand Prix. I have no doubt the wheel will survive as Singapore Inc. doesn't like to air dirty laundry in public. I'll put money on sovereign investor Temasek to step in and buy up some equity . . . "nothing to see here folks . . . just happy smiling people . . . "

Sydney has had a series of foggy mornings, but today once the mist cleared it was glorious. As I didn't ride yesterday I got out the Evo and enjoyed the autumn sun (19ºC). 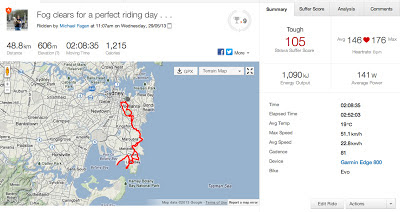 I really could have ridden all afternoon if it wasn't for the fact that I had to get home . . . well that and I don't like to be on the road when the afternoon school run begins. Anyhow for part of the ride I tracked a couple on Cannondales (B&W Evo and Synapse). It's funny how people don't smile here in Sydney when they're on a bike given what a friendly place it is. I said hello and honestly you'd think I'd broken an unwritten law or something. Hey people it's OK to just enjoy yourself. I remember once in Switzerland riding up a a hill for the best part of 20mins with a group of Spanish cyclists who just joked and smiled all the way up the Col ... and they included me on every joke, dutifully translating to English after every belly laugh. That's riding. Be happy.