As you get older you tend to listen to more talk back radio. A lot of what the various hosts say is obviously inflammatory rubbish, but occasionally they come up with an interesting guest. This morning I caught an interview on one of the commercial stations in Sydney of the lady that runs the Asutralian Bureau of Statistics stat unit that deals with this weeks job numbers. For some reason I always thought those numbers were based on registered job seekers and payroll and income tax records, but I was wrong as they are based on a survey of 32,000 households. The survey uses data from the census data which is collected every five years. They then work to spread the sample across geographies and income groups. If they are unable to get a suitable spread they add weighting factors in order to meet the requirements of the series in question. Therefore what are we to conclude about the 51,000 jobs created last month in an economy more than 10x smaller than the US which created less than 200,000 jobs in the same period. Statisticians will no doubt defend their work and probably point you to the mean growth rate as being positive, though the volatility is quite high. In other words we just don't know whether those 51,000 jobs are real or not. It's another case of having to take the trend and then patch in other pieces of information before making firm conclusions. Sorry. 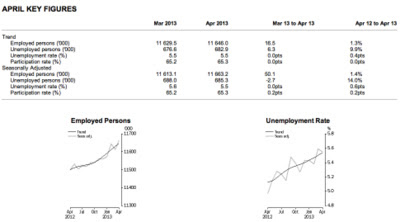 Apparently hiring in Australia has been spurred by energy companies from Chevron Corp. to ConocoPhillips that are building seven liquefied natural gas projects in Australia at a cost of almost $200 billion and construction of Santos Ltd. (STO)’s $18.5 billion Gladstone liquefied natural gas project on Queensland state’s Curtis Island will peak this year - more than 7,000 people are working on the development. Next up will be the home loan data out next Monday which is forecast to show an eight per cent lift in new home loans being written during period. GDP for the March quarter is likely on the basis of these numbers to come in around 1.4%. So if this is all positive why did the RBA cut rates. Well the RBA has better data, especially in terms of housing debt repayment and obviously is betting that the economies in NSW are under pressure from the high AUD. They cut because they know what happens when things get out of line, anyone who saw the Spanish housing debacle, where construction peaked just below 60% of GDP can see what happens when boom turns to bust.

There are still housing booms in Europe, just look at places like Switzerland and Sweden. Housing is so tight in Sweden that an investigative report by the Svenska Dagbladet (SvD) newspaper showed that private landlords are selling rental contracts, at prices ranging from 40,000 kronor ($6,100) for the outer-lying suburbs to as much as 900,000 kronor for a two-bedroom flat in central Stockholm. This used to happen in Tokyo and was called "key money". It probably still does happen. Sweden was once the land of open-ended leases, but now landlords are trying to increase turn over so the can convert buildings to co-ops. Even social paradises of the Nordic type have problems.


The real controversy of the day goes to the decision by Katusha to seemingly slow up on the pace when the peleton was split by a fall. Notably it was Sky team leader Bradley Wiggins who benefited most as he was able to get back on to the lead group and save himself a minute plus. Cycling is a bit like baseball, there's lots of unwritten rules. The usual rule about riding accidents is that if they are caused by external factors, such as tacks on the road or a team car hitting a rider the peloton slows the pace to enable those able to get back on to the group, but what happened today was a riding accident within the peloton itself and therefore you don't slow or change pace on purpose. Many will suggest that Katusha should have continued at a normal pace, leaving Wiggins and some other GC riders to their own devices. The point being that by not riding near the front and sharing the work gets you into trouble and you pay if something happens. Of course for Sky and some others it wasn't their fault and you have to say that "it is what it is". One wonders though what might have happened if the majority of Garmin had been on the front with Ryder Hesjedal whether they would have adopted the same policy given Wiggins is likely to put between 1 to 2minutes on their man during the 55km TT on Sunday. Remember in a TT no one stops or slows down if you fall or have a mechanical . . . it's just bad luck.