The M&A market is not completely dead. I know Monday's blog looked like it was raining on the equity market rally; that wasn't my intention, so as if to prove me a bit too miserable along comes a new deal.

Yesterday Warner Chilcott agreed to be bought by Actavis for $8.5bn. Pharmaceuticals have never been in my core competency as they always seemed to be exercises in DCF calculations or highly dependent on very specific news flow that required a certain element of obsessive "nerdism". The very fact that Warner Chilcott is expected to see sales slide 15% lower by 2016 doesn't speak highly of this being a deal predicated on a growth strategy. Maybe the most interesting part of the deal will be the $400m in synergy saving expected to be generated by the new group primarily driven by Actavis moving its' HQ to Ireland. As I said on a blog in the last month the market for corporate earnings is starting to become very aggressive and will require major tax jurisdictions to rethink their response to the international economy. The legislature want to claw back lost tax dollars (see the latest from the hearings in Washington highlighting Apple), but at the same time there has to be recognition that companies have the ability to rebase themselves to best deliver returns to shareholders.

My favourite graphic of the last 2 days is that showing the continued strength in the Chinese property market. The market which in March saw China’s newly installed premier Li Keqiang call for a moderation in growth is thumbing its' nose at the leadership.

The recent fall in the Aussie Dollar may be less dramatic than many, including myself may have thought as China without further intervention may yet provide a backstop to core commodity prices that some of the biggest investors in the world have not factored in. Therefore the next important move for the region will be the introduction of further measures to slow the Chinese property market. It would be interesting if the Chinese go for the brakes around the time of the Australian election. The twin outlook of further action by Beijing and an Australian budgetary clean-out by an incoming new government could be the perfect storm for the AUD.

In the opposite predicament to the Chinese are the Japanese, 20 years of negligible growth have left the  BoJ with few options because they've tried a little bit of everything already. The BoJ left the policy levers alone today and allowed the JGB some respite after the recent shift along the complete range of maturities greater than 2 years.

At present, the BoJ is buying long-term JGBs worth a ¥7 trillion from the market every month, But in the last week we've seen a sell-off in JGBs and a continuation in the N225 rally. What should we make of this? The N225 for all it's global reach is still more correlated to US growth more than its' own bond markets, this means you almost would be better of watching US rates than Japanese rates. The JGBs interestingly have fallen sharply even in the face of the BoJ buying. 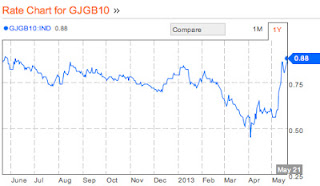 The concern now must be that the BoJ has damaged the pricing mechanisms of the bond market and may actually cause local holders of JGBs to adopt a new strategy that effectively undermines Japanese government debt causing a run on JGBs. The market is nervous and Japan's reflation efforts are somewhat reliant on other nations to continue to add money to the system. If the Fed pulls out of the  QE game it may not be good for Japan's current efforts.

The rain that has plagued the Giro d'Italia has found its' way to Sydney. My 40km lunchtime ride turned into a slog-fest against a driving rain storm that swept up from the south and drenched me for the next 25k's as I headed towards the safety of home. Luckily I was riding my Mavis Cosmic Carbones SLR's with the Exalith braking surface because there wasn't a whole lot of places to hide from the pooling water and cars that threw up spray along my route. 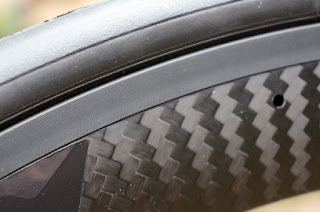 The main thing you have to do when riding in the city in rain is slowdown, even a a steady 25kph the stopping distance is at least a third greater on days like today. If I was on a full carbon wheel you could double the distance for stopping. It's all quite tricky when you factor in cars who don't turn on their lights or moderate their own speed.

Luckily I had a rain jacket and front and rear lights with me today. I ride with the Altura Ergo Fit Race Cape Jacket. 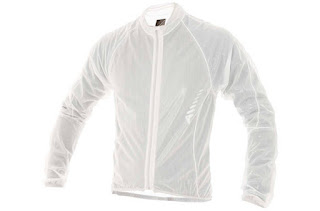 I like it because its translucent with a number of reflector points on the front and back. It's not 100% waterproof; it's better thought of as shower proof as it still lets some moisture in. Nothing is perfect and perhaps a Castelli Gabba Jersey might be worth investing in if you live in an area more prone to showers. For Sydney I think this is about right.

The result of my riding is thoroughly drenched shoes and helmet. The recommended course of action is to set all items out in a warm dry place away from direct heat. I like to stuff my shoes with newspaper and set them on a 45º angle so the moisture can run into the paper and not pool in the sole of the shoe. As for my helmet I find hanging it up is better than laying it on a surface as you want air flow to take away the moisture. Whatever you do, please don't put shoes and helmets in front of a heater as you'll find leather can crack when it drys out too fast losing it's suppleness. As for hard plastics and various modern enclosures heat can melt or warp these . . . especially if you chose to forget you left them out when you settled in for an evening of fine wine and the Giro.