Markets remain in change mode and once again the old adage of sell in May and go away looks to be correct. In the US the time is fast approaching for a change in the leadership of the Fed. The US bond markets and the USD both understand this, but some hold out for a continuation of the current status quo.

Ben Bernanke might just be in personal exit mode himself judging from the noise in the upper reaches of the economics establishment. An application was received on the weekend from none other than  Lawrence Summers (aka "Larry") via an opinion piece in the FT: "It is no time for faster cuts to the US budget deficit" . . .

"Premature fiscal tightening has taken a toll on UK economic growth. Things are looking up. Led by rising house prices, the US recovery is likely to accelerate this year. Budget deficit projections have declined, too. And although the European economy is stagnant, there is some evidence that stimulative policies are gaining traction in Japan. So this is an opportune moment to reconsider the principles that should guide fiscal policy."

It's worth reading if you want to see inside the current debate in the US between the various economic schools. What it says to me is that the Keynesians are trying to frighten the political establishment into continuing their line of ascendancy. It also says that we are clearly now at the point where someone's got to give a little and start the like road back to normalcy. The problem is that any half intelligent observer of financial markets understands the overshoot that happens 99% of the time in just these situations. If Larry Summers was to get his hands on the Fed presidency then I'd suggest he'd do just that; overshoot and leave us with a potential problem in the form of inflation. Either way the bond market is right to retreat from bubble mode.

Meanwhile the currency wars continue to hot up. I probably didn't fully appreciate the mood in Asia post the Japanese stimulus package(s). The South Koreans have warned the G8 that they need to do more to tackle the “unintended consequences” of Japan’s monetary easing when they gather for a summit later this month. Hyun Oh-seok, the South Korean finance minister and deputy prime minister, said that international co-ordinated action was needed to mitigate the impact of so-called "Abenomics" on currency markets. The Koreans have, as I have pointed out recently been one of the major beneficiaries of the recently ended bull market in the Japanese Yen. Now with things back to a level that puts them on a similar playing ground in world export markets the Koreans are not going to have things their own way anymore in sectors like heavy machinery and car making. Mind you the Koreans are not the only ones in this camp as evidenced here in Australia by Ford saying they will quit the country because of costs associated with manufacturing here. Read that Ford move as being about the high dollar. The RBA failed to grasp the importance of the high AUD until it was too late . . . part of me thinks that Governor Stevens was enjoying the purchasing power of the Aussie on his visits to various central bankking conferences. Ok, that's a bit unfair, but so to was worrying about the Perth property market instead of the industrial basins surrounding Melbourne and Sydney, at the very least the RBA should have been talking things down more aggressively. This brings me to the comments over the weekend by former government adviser Ross Garnaut, a key policy man in the 80's regarding the floating of the AUD. Garnault says that the Aussie was between 20 and 40% over valued at it's peak. The AUD is down about 8% since then, so the logical conclusion is that 85c is the first serious stopping point.

The Japanese super stimulus will be of little long term benefit unless the government makes associated structural changes. In the early 2000's there was a similar inflection point in Japan and it was marked by a rise in investor activism. At that time groups such as Steel Partners and Perry Capital tried to bully "old" Japan into getting their balance sheets into shape. Obviously the "raiders" wanted to be the main beneficiaries of any such move, but there was a bigger point. Essentially Japanese companies have long carried too many under-performing assets on their balance sheets. I include in this cash reserves as cash returns in Yen have been pitiful for decades. At the time the idea was that assets would be sold and gearing raised, while excess would be returned to shareholders. This still remains the case and the most recent example being highlighted has been Japan Tobacco where the board has reluctantly chosen to do buy backs and increase the dividend. JT of course is enormous, but their only way of growing is to push into emerging markets where governments are still to legislate against the industry, though it must be said that this won't last long and therefore JT needs to realise it's a cash machine only and therefore needs to get comfortable with that role. They might also help the rest of corporate Japan wake up to the brave new world investor relations . . . the consequences of not doing so is to leave the country addicted to money printing as a way out of its' long malaise.

It's not M&A, but it's big. Carlyle Group has agreed to sell a New York office tower for $1.3bn, the largest deal for a US building since 2010. If the deal goes through, it will the biggest sale of a single building in the US since Google bought the 2.9m square feet 111 Eighth Avenue in December 2010 for $1.8bn. They originally paid about $600m at the height of the GFC. It's a good sign and consistent with  the numbers we've seen in the property sector in the US and the continuing desire for yield on investments. The US dollars recent rise should remain a salutary lesson to investors. The prime property markets in the UK and parts of Europe offer similar returns, not just because of an eventual end to the morbid growth of the past 5 years, but also because of the relative value of the underlying currencies.

Meanwhile back in my old home of Geneva my friends were treated to the first stages of the Criterium du Dauphine. As a guide  to whats possible here's a Strava track of a friend who rode out to see stage one of the event: 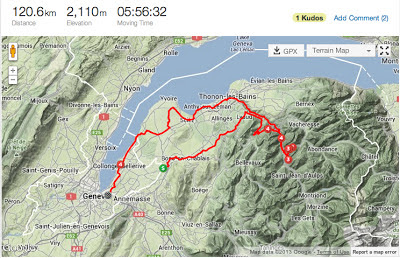 This is a great ride, though you could cut out the climbs that my friend added because he's one of the strongest non-pro riders in Geneva. He didn't go to day 2 as he had to work in the family bike shop, so instead here's the course with associated stats from Blanco rider Laurens ten Dam: 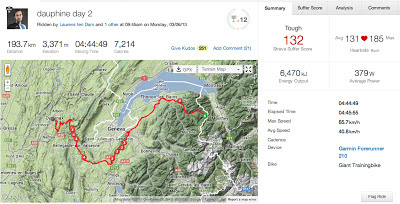 A great variation for anyone riding in the Geneva area would be to head out into the rolling countryside to Bon en Chablis before follow the route the riders took through Annemasse to La Maraz and the east side of Mt Saleve before heading up and over and back into Geneva. With blue sky and the right bike you might even forget about your government bond portfolio.