The fall in the Australian Dollar reminds me that while as a trader being courageous will not always pay-off, being patient and smart does. The deterioration in the finances of the country, while not in any way catastrophic has instead underlined that the past few years have been abnormal for an economy that is very unlikely to ever brake away from the "cyclical" label many have pinned on it. Ideally the RBA would like the dollar in the mid-80's. That seems possible on a leg down, but unlikely given the free-wheeling money printing by the likes of the Bank of Japan. 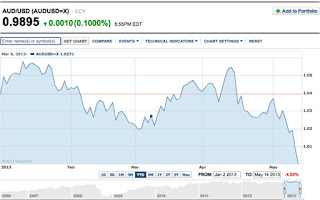 Unlike Australia and crucially for the AUD/USD pair is the fact that the US budget deficit is declining faster than expected. The Congressional Budget Office figures showed the deficit falling to $642bn, or 4% of GDP. The moment in the US is hard to ignore and the Fed is stimulating internal discussion of how do exit the QE spiral.

Fed President Bernanke seems committed to unemployment being the chief trigger for the unwinding of QE. Although unemployment in the US is falling, the participation rate remains somewhat lower than ideal. Unemployment at 7.5% and likely to head towards Mr. Bernanke's magic 6.5% over the coming year makes it reasonable that the FOMC has at least started to discuss an exit from QE policies. The market as I have said many times on this blog tries to price things in around 6 months in advance, but I would argue that this will come sooner because of the bubble nature of the last 2 years. This primarily means the bond market. The danger now is that the biggest bull market we've ever seen in bonds unwinds in a less than savoury fashion.

The bond market currently, as evidenced by the recent Apple mega deal has been tapped well and truly.  If you haven't raised money yet then you may just miss out on one of the all time great debt issuing opportunities.

The latest piece of paper to cross my desk was Macquarie Banks new Capital Notes (CN). Mac Bank is moving to bolster its' Basel II credentials via these notes which have a non-viability trigger embeded in them. I haven't seen the prospectus, but leaving aside the spin these must act something like the co-contigency notes such as those first issued by Credit Suisse. As an investor I've said before there is nothing wrong with a small holding in such paper so long as you understand they'll act a bit like being short a put option in a crisis. For that option (in this case) you get a coupon of 180 day bank bill rate + about 4%. That's not too bad at the moment and you'll have some protection if rates rise. Worth a look, but keep your portfolio risk in mind etc.

While it has been good to see Cadel Evans getting back to form at the Giro, the leader Vincenzo Nibali (aka the shark of Messina) has been in great form all season. Nibali of course beat a similar field at Tirreno–Adriatico and now is in a similar position at the Giro. Astana has only one leader and a good team, on the other hand it is arguable that Sky through Wiggins misfortunes and form has now opened up questions for the team manager about whether it may be better to put their faith in Columbian climbing specialist Uran and allow Wiggins to become a loan wolf. At BMC I don't think Evans has had support of a similar quantity or quality to that of the other major GC contenders.  One thing is for sure and that is that the Giro is fantastic to watch and yesterday's stage 10 in Fruili was both pretty and mesmerising. I defy you not to enjoy the spectacle: