US Non-farm payrolls came out on Friday showing 165,000 increase in April compared with the 140,000 gain forecast by analysts. The unemployment rate fell to 7.5%, its lowest level since December 2008. As I had said last week there was a certain amount of gloom being built into the market, so the "pop" to new record highs didn't surprise me. 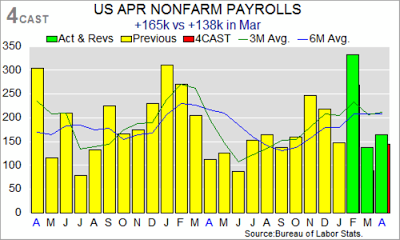 Having said that it must be noted that this type of job growth barely keeps pace with the population growth and therefore allows Ben Bernanke to continue pumping in $85bn per month and effectively provide the stock and bond markets with a put option against which to trade.

Over the weekend I listened to the usual podcasts from various commentators, one of my favourites over the years is political round table "Left, Right and Center" from National Public Radio in the US, Curmudgeonly "left" commentator Bob Scherr had a libertarian rant about the Fed's QE which had me thinking about the Japanese ZIRP. Japan had maintained a zero interest rate policy (ZIRP) between 2001 and 2006. That's a lot of years.

The effects have been broadly negligible in that the mean growth rate and trend growth rate have remained barely above zero, but the variance in the GDP growth rates has increased as the economy bounces between despair and hope. You see central bankers are now keeping the economy in a perpetual state of expectation by saying: "just one more year . . . just one more administration . . . " The very fact that Japan has re-adopted the policy shows a certain amount of stupidity, but how then do we explain that the wholesale adoption of a failed strategy by the Fed. The challenge for investors remains to know when to jump onto "flow" and went to jump off. Which brings me to the point that I always return to: what distortions are we creating in the investing world when we price money at 0%?

Last week Westpac (Australia) reported a very fine set of figures to the Australian Stock Exchange and announced a special dividend. Interestingly the Australian banks remain in pure valuation terms some of the most expensive stocks in the global financial sector to hold. I was ruminating on this fact with a broker recently who clearly was advising people to reduce their holdings of these stocks. Broadly I think he's right, but to the great mass of investors it remains hard to sell something with a return on equity of 16.1% easily 50% higher than it's global peers which pays dividends at a rate above the risk free and obtains it's earnings by an economy for all its' faults clearly well within the AAA zone of the investment universe. The solution for investors is to remain vigilant for switching opportunities with the sector both locally and internationally.

Yield remains illusive. Recently I wrote about the GBP5bn UK property portfolio being sold by Commerzbank. I have advised a number of high net worth acquaintances to try and access the sales process because:


While it was unlikely you could pick up bargains in core business London certain fringe areas may offer redevelopment opportunities when paired with the mega developments. One of the most successful national sovereign wealth funds, Norway's oil fund is targeting a 5% weighting in property after many years of being under weight. They're limiting themselves to a yearly 2% cap of assets under management so as to not overcook the market. The fund traditionally has remained fully invested in stocks and bonds. This diversification is significant as it underlines my thinking in respect to the value of yield and the value of hard assets in  a world determined to print money. The example is there for all to see . . . investors it's up to you. Paper asset prices may be out of line, but hard investments in commercial real estate centrally located in major business areas globally remain attractive.

In property terms the islands surrounding the Bay of Naples have been in demand since Roman emperors first decided to build villas on the Island of Capri. Yesterday the Giro stage 2 went to Capri's sister Island, Ischia:

Sky now holds the maglia rosa, they have a 9 second advantage over the Movistar riders and importantly a 14 second advantage over Nibali of Astana. People forget that unlike the Tour de France the Giro still has time bonuses for podium positions and therefore the gap might not be as significant as some members of the press think. Monday’s stage 3 is a 222km leg from Sorrento to Marina di Ascea, with the category-3 climb of Sella di Catona sitting 20km from the finish. It will be interesting to see if anyone decides to challenge Sky early in week one by forcing the pace. Remember that Wiggins doesn't have Chris Froome or Richie Porte to support him in senior leadership roles like he had at the TdF last year so the fight might be a little more even than expected.
Ciao!
Posted by Mike Fagan at 02:09