It had to happen . . . breaking the speed of sound

Things have changed a lot in the Apple bunker in Cupertino California. I can't imagine Steve Jobs getting cozy with Wall St the way Tim Cook is, but different times call for a different approach. Apple's biggest problem is that competition has ramped up in the crucial area of mobile devices, but Tim Cook is somehow being convinced that his biggest problem is the $145bn he has sitting offshore. Mr. Cook please do not let yourself be distracted by cash dispersal or spending it on needless acquisitions. Yesterday I wrote that I liked the fact BHP was starting to refocus on its' core operations, the beauty of Apple is that it has a clear a simple set of product lines . . . they don't have to refocus their business they just have to block out the noise. Bolt-on acquisitions of technology is acceptable where you can quickly integrate or successfully incubate at a low cost in money or time to management. If Apple were to make a significant (for them, greater than $5bn) I would quickly say the dream was over.

Today Tim Cook went to the dark side by selling $17 billion of bonds in the biggest corporate offering on record. The bonds went in several tranches with $3 billion in floating-rate notes and $14 billion of fixed-rate securities in six parts with maturities from three to 30 years. I don't have the termsheets yet, but will be getting them. The point now is that Wall St will have a guaranteed stream of fees for years to come as Apple rolls over and restructure bonds on an almost annual basis. The fees on these issues is low, but the cost in time and management manpower is high and I would expect that the number of staff working in the CFO's office will start to expand in short time. The noise will be deafening. I want to be clear in that the banks have only provided a solution that the CEO and board has asked for. No one has done anything wrong. Tim Cook can honestly say he's giving back cost effect (ie. tax effective) capital to investors. Sometimes though it's not about the black and white math of the situation when you're deciding to invest in stocks. Investors in Apple's intellectual property and creativity have to be concerned.

And so to slowing growth elsewhere . . . China’s official purchasing managers' index (PMI) fell to 50.6 in April from 50.9 in March. Back on the 15 April we had found out that Economic growth in China had unexpectedly slowed to 7.7% in the first quarter. Now the PMI is confirming the ongoing trend. China remains an economy in transition and without the demand from the G7 for its' manufacturing strength the era of double digit growth looks to be over. That in itself had to happen someday. The smaller Asian tigers, such as Korea and Taiwan have been through this, so the Chinese leadership should have lots of examples about what not to do. One thing they'll want to avoid is the '97 situation where a debt bubble burst sending the tigers into a frenzy of bailouts and restructuring. The government has been attempting to slow things for some time now and reports are that this has had mixed success.

The slowdown in Chinese real estate really hasn't materialized yet on the balance sheets of the developers because of the carrying cost of old land banks. For the last 18months the government has been putting up duties and telling banks to back off on the credit, but because the gross margins available to developers holding this old land was so clearly viable the banks have felt fairly justified in handing out cash. The trouble comes now as prices have stabilized and been driven up, but so to have costs. I expect some more slowing to happen and with it will go some of the consumer confidence amongst the Chinese. Buyers should be cautious.

I've been reading some reports that the US is reflating their property market too quickly. A nice piece yesterday on Zerohedge and today more news in the WSJ highlighting  the composite 20-city home price index, which was up 9.3% in February from a year earlier. All 20 cities posted year-over-year gains for January and February, the first time that has happened since 2006. Phoenix was up 23%! 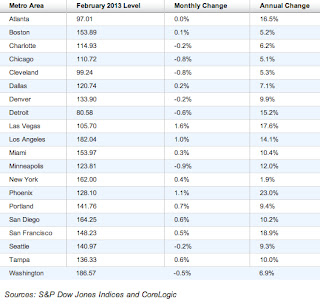 Should I be worried that even ground zero of the housing bubble, Las Vegas, was also up strongly?  I tend to think that this is the result of the Feds actions and we are getting closer to a time when we see the Fed's open market operation changed to a more neutral phase. I know most economists believe that inflation is dead and it certainly in my view is quiet, but at some stage the bounces in the housing market demonstrated by the above survey will feed back into the economy and its' then that you won't want to own bonds . . . even bonds issued by Apple.

A friend of mine is following me down the path and buying a Cannondale Evo. I hope he doesn't hold me too responsible for seducing him into the dark side of high end carbon bikes. It tends to be easier to recommend these bikes to 70kg riders than 90 kg riders as they are really finally tuned machines. I liken it to buying a Ferrari, or perhaps getting a mistress. All require time, money and a lot of attention; if you don't look after any of them you are in trouble. Regular servicing is the key.

Today's ride has once again highlighted some faults with my Garmin. I guess I felt pretty good on the bike today and I managed a few PB's, but I didn't expect to break the speed of sound . . . check it out: 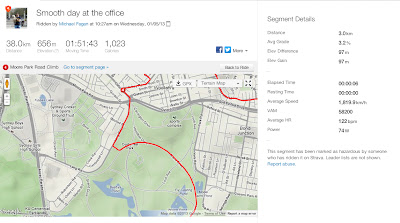 A mere 1800kph on a public road . . . Mark Cavendish I have your number. Give me the green jersey now!