Turning Japanese . . . because it's getting cold

At what stage do Japanese equities say enough? So far this year they're up 45% on the back of a Yen that has fallen from 78 to 100. My first thought of this was back on May 7 when Toyota revised up earnings on the back of the currency. At time I said to a friend that it seemed somewhat gratuitous as a CEO to be upgrading not because business is getting better, but because of the FX translation. That is a little unfair because my reading of the US economy says that Toyota's main market is going to help them out this year and if the FX translates to a pricing advantage then so much the better. The point is that it's hard to buy into a market that has performed so well when you have doubts about the underlying structures. The very fact the BoJ is back to a strategy that they have employed unsuccessfully before, though not quite in the same size or with the same vigour does make me raise an eyebrow.

Late today the market was hit by some Yen strength when we found out that Japanese GDP during the first quarter had expanded by 3.5%. And that is the danger to a fast rising market, the policies get in front of reality and the market starts to think the government will take their foot off the accelerator.


The three biggest Japanese lenders – Mitsubishi UFJ, Mizuho and Sumitomo Mitsui – might quite like the government to slowdown its' JGB purchases as they have been effectively sidelined from this market, which was a core money maker for them. Yesterday they forecast lower profits for the financial year to next March because of this very reason. Sometimes I wonder what else can go wrong in Japanese banking? The sector took years to clean up their balance sheets after the real estate bubble of the late 80's burst and many would argue they never recovered as they should have.


The Spanish are goinng through the exact same situation in the banking sector as the Japanese because of a "don't ask, don't tell" mentatlity at the ECB. The numbers coming through from Spain suggest more write-downs on Euro 200bn of business loans. What matters now is for the banking system to factor in such balance sheet moves and raise appropriate capital while rates are low and equity markets are relatively high; the environment has been setup perfectly by the ECB. Investors of course need to be cautious as experience tells me that you will be in the business of picking survivors and not of just being given money without strings attached.

As I'm on banking it is note worthy that HSBC is considering cutting a further 4 - 14,000 jobs. CEO Stuart Gulliver is desperate to get his cost income ratio down to a level that helps raise his overall RoE. Many thought Gulliver would target 48 - 52%, but instead went for 55% which seems reasonable. I don't have a table of peers to compare this to, but 48% would seem very low for a bricks and mortar high street bank. 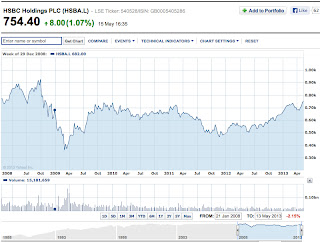 Sydney is a funny place to ride a bike. It's kind of hilly in a San Francisco way. It seems improbable that you'd want to ride up and down hills all day . . . that means that people who don't ride think no one else should ride either. Obviously these people have no sense of modern bike mechanics; trying to explain the 11 speed cassette and compact front chain ring means nothing. Now we're in the autumn and even though the days still hit 20º Celsius the mornings are sub-10º, people start to wear overcoats and scarfs. It reminds me of Hong Kong, where the ladies wait for those 2 weeks a year that validate their ownership of a $100k sable coat and matching hat (say 8º). For myself I have been wearing arm warmers and a gillet for rides. My newly purchase white Rapha gillet is perfect for low-teens riding and I'd recommend that as a basic for most locals here.


As a back-up I recently took delivery of a Castelli Motorolo Due Jacket with the tasteful (?) digital camo pattern. I'll be riding this sub 15º jacket on the weekend and will attepmt to send out a review for readers. I don't have the matching tights. The jacket was 45% off at wiggle.com and even though I had it on my Christmas wish list I'm happier now at AUD 135 bucks delivered to my door!