The US debt ceiling was suspended on February 4, 2013 until May 19, 2013. A broker's note reminded  me of this fact this morning. Included with the note was the following graph showing news stories with the keywords debt ceiling in them: 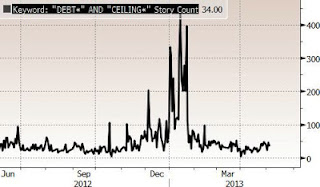 Now I'm not going to superimpose the S&P over the top of this but when complacency rules investors need to expect trouble. As I said yesterday the market rallied on the US non-farm payrolls because it was positioning for weakness, the market now is positioned for complacency.

Just a quick word on Australian banks after yesterday's blog. The banks trade on a PBR of 2, when most of their global peers trade at 1.5x or less. Additionally they yield 200+bps above the local risk free rate and their RoE is about 50% higher than the same peers.

The US job numbers acted like an electric shock to the copper market. Copper has been weak for most of the year strangely given its' correlation to bull markets. Chinese buyers were out in front with Jiangxi Copper up 5.2% in its best day in five months; Shanghai copper futures climbed by their 5% limit. Maybe this is a dead cat bounce, but the demise of copper has always been somewhat exagerated and predicated on an over supply v. weakening Chinese demand. Maybe some of the mine closures and project cancellations are going to start to bite?

My view on M&A has been sorely tested of late. BMC Software shares was sold to private-equity firms Bain Capital and Golden Gate Capital for $6.9 billion. Technology investors remain confident and willing to spend money for assets. Money is cheap and good businesses are rare.

I just returned from a morning ride and for the second time in a month I was hit by a car. This time it was a lot worse for me and I was lucky to escape with a bruised hand and some scuffing of my handlebar tape. The car that hit me was driven by a 60+year old librarian on her way to work. She stopped and had to put up with a 30second rant from me. I appreciated the fact she gave me her name, number and place of employment. Her car bonnet though will probably need a bit of work. My bike was lucky because it was a small car. I'm guessing if I'd been hit by the likes of an Audi Q7 that my bike and I might not be still with you today.

The Giro is already getting very sexy. It's another good reason for staying alive, because this is going to be good. The stage today had two rated climbs and Ryan Hesjedal decided that Sky were not going to get an easy ride. I thought the reigning champ was fantastic as too were Evans and Nibali. Don't get me wrong, Wiggo looked great, but he wasn't given an armchair ride that he got at last year's TdF. Did you also notice the importance of the time bonuses? Hesjedal got 8 seconds back on  Wiggins even though they finished a wheel length apart at the finish. In the Giro riders are compelled to go for the win. Stayed tuned for what could be the best racing of 2013.