Pictures everywhere . . . . sometimes it takes 24hrs to get perspective

Being short the Aussie Dollar has been a past time for many on "planet hedge fund" ever since 2008. The almost unbelievable way the country sailed through the GFC seemed ludicrous if you were sitting at ground zero in London or New York. Now rumours that the big kahuna of macro economic trading, George Soros is playing once again in the Southern Hemisphere has traders looking again into the possibilities.Bloomberg contributor Michael McDonough (twitter: @M_McDonough) put together a few interesting charts this week that may help the likes of Mr Soros sleep soundly on his short. My favourite shows global manufacturing slowing down: 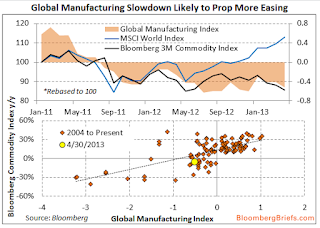 Stanley Druckenmiller managed $22 billion with and for Soros at the latter's Quantum Fund. Yesterday he joined those publicly calling the AUD one of the best shorts in the market. Readers of these blog know that I've long seen the AUD as being over priced, but have had to recognize that for all it's potential weakness an offsetting set of super lose monetary policies by the Fed, ECB and lately the BoJ has meant that it has been somewhat protected from the obvious frailties of being a commodity driven economy, spending too much in a less than bullish world which is as the chart illustrates slowing again. The AUD is up 45% since the crisis started, though that fails to acknowledge it fell about that much at one stage, so really the truth is that like the S&P it has retraced much of its' losses on the back of cheap USD, EUR and now JPY's. Mr. Druckenmiller may end up making a lot of money on his trade, but given a likely change in September to a more fiscally responsible government in Canberra it looks like he may have to rely on the Fed and the other central banks to really make it pay-off big.

Yesterday the markets were cheered by the Chinese total Import numbers, which rose 16.8 per cent in April, up from a 14.1 per cent rise in March:

This is the flip side to what I've just written and another reason why the AUD hasn't fallen yet. As if to thumb it's nose at Druckenmiller the numbers show that imports of iron ore, a key Australian commodity, were up 16.4 per cent by volume in April compared with the same time last year, bringing import growth for the first four months of 2013 to 3.9 per cent compared with the previous year. 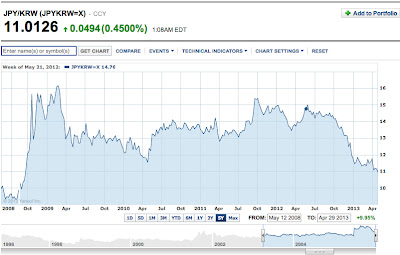 The Koreans have had a distinct FX advantage over the Japanese for a number of years, so the inability of either of these export led economies to generate sufficient internal demand has left them in the similar positions. The result is a currency war. The South Korean currency at these levels will start to take its' toll on Seoul's budgets, just as the high AUD has basically been at the heart of the current problems in Canberra.

I didn't manage to write a blog yesterday as I was still think about my brush with death thanks to my lucky escape while on my Tuesday morning ride. I got out for some laps around Centennial Park late in the day to test how things had settled on the Cannondale. I always find that machinery (and for that matter people) may only show the true effects of an incident after "cooling" down. I saw no problems with the Evo after being hit, but noticed a looseness in the headset while in the park. Not a big problem, but clearly demonstrating that you sometimes need a little time to calm down and get perspective after going through a high stress situation.

The Giro has been great and yesterday's stage once again was absolutely fantastic. Watching Mark Cavendish "paper-boy" up one of the climbs made me even more appreciative of John Degenkolb's winning sprint in wet weather.

Fantastico . . . it's well worth getting the extended highlights.