Dig a little but don't mess with small things too much . . .

The stream of news on my iPhone home screen is my first connection with the world most mornings. This morning's top story was Deutsche Bank looking to sell 90m new shares and raise €2.8bn. 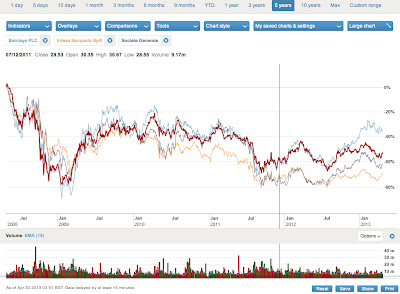 I'm still amazed that it's taken so long for DB to do this, but so be it. The co-CEO's Jürgen Fitschen and Anshu Jain have been under a lot of pressure to get the balance sheet cleaned up ahead of the Basel III changes due in 2018. Germany of course is desperate to show leadership on the issue of solvency and even if the DB chiefs had wanted to chance their hand and waited for the European autumn I'm guessing they had little choice. So where does that leave DB? Well given they have some €2trn in assets a capital raising of this size does very little if they don't have the assets marked correctly. If they have everything lined up right then their Tier 1 capital goes to 9.5% which to me still seems low for a systemically important institution such as this one. I'll guess that this won't be the last capital raising we'll see, but it's positive for the moment even if the bears will cry about the pop in the share price today.

Meanwhile in Australia one of the four pillars of the banking system reported. I have never really followed the action at the ANZ, but the reason I picked up on the news today was the headline talking about a drop in expenses. The local operations saw a 9% increase in earnings, while the overseas ops managed only 3%. The key was the productivity gain from cutting 2000 heads going to 47,419 from 49,509 over the last 12 months. The bank also commented that mortgage demand in their core franchise remained near all time lows. As I've said before, head cutting tends to be a one trick pony unless you believe that technology is making rapid strides in it's ability to scale operations. We know from the US experience that technological advancements can often prove overly seductive as is exemplified by the case of the "robo-signing" at BoA/ML amongst others. There was also a slight increase in bad debts bad debts to A$599 million from A$570 million a year ago due to ongoing stress in some parts of the economy. ANZ still has to raise capital to meet the local Basel III requirements as they currently have a tier 1 ratio of only 8.2%. The good news is that with RoE at a healthy 15.5% they unlike DB have the luxury of time to get things in line. I won't be buying ANZ shares where they currently are, but I fully appreciate those that might keep these rather than jump on the DB offering.

For the record the other Aussie banks report: Westpac Banking Corp. May 3, followed by National Australia Bank Ltd. (NAB) on May 9 and finally Commonwealth Bank of Australia, the largest lender, on May 15.

Still on an Aussie theme, though it's really only an historical touch point I noticed that BHP Billiton is selling their Pinto Valley mine and a railroad in the U.S. for $650 million in cash. Pinto Valley is projected to produce 130 million pounds to 150 million pounds of copper in concentrate and about 10 million pounds of copper cathode a year, as well as molybdenum and silver. The buyer is Capstone (CS) and they'll pull copper out of the ground at a cost of about $1.80 v. current spot of $3.20. There's one point I'd make here that like nearly every global business in the last 10years they let things get out of hand when the going was good and the Chinese were happy to buy everything on offer. In adopting such swashbuckling ways they took their eyes off the ball and let things get away from them. They've now sold $5bn of assets in smaller operations in the last 12 months. Someone at BHP has said enough is enough: "let's get the big things right". The legacy of Marius Kloppers is that you can only do so many things and get them right. I now own some BHP and hope that the current management trend continues.

I've often been criticised for tinkering with my portfolio too much over the years and I think that's fair. I do the same thing with my bikes because I think I get obsessed with having things running perfectly. Yesterday I dropped off my Campagnolo Bora's to have the tubulars replaced and in doing so I switched the Fulcrum Racing Zeroes to the Pinarello and brought out the Mavic Cosmic Carbone SLR's for the Evo. It's not as easy as you might think because there's a lot of brake pad swapping that needs to take place. With the Mavic you need the special Exalith pads for the coated braking surface. The good news is that I love the exalith surface for pure stopping power; in fact I think it's better than Aluminium. The bad news of course was that in making the pad switch I managed to strip out one of the brake bolts that hold my shoes to the Campy SR skeleton brakes. 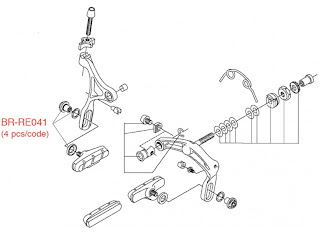 It's easy to do this if you are me because you start to get overly picky on positioning which made me make several attempts with the torque wrench when I should have just left well enough alone. Live and learn. I ordered replacement bolts from an overseas supplier as trying to get this stuff in Australia is near on impossible. I get 4 bolts with washers etc. for about $45 from Slanes in Ireland and they should arrive in about 5 working days.

The Mavic wheels rode really well, and while I'm not sure the bearings are quite as good as those on the Fulcrums or the Campy's it's hard to complain too much.