What is real Genius?


I'm going to start an Ivan Glasenberg fan club. I have no idea how he's been able to convince investors that 3.05 Glencore shares for each single Xstrata share is enough to buy full control of my favorite mining company.

The fact that he has leaves me somewhat awestruck at the man's deal making ability. As I write this Glencore is trading at GBP3.70 v. Xstrata @ 10.26. That means the market is currently pricing in a takeover premium of only 9.9%. Given that XTA trades on around 6.5x earnings and this in turn is being paid for with shares that have a reasonably limited history I tend to think that this could be the deal of the decade (and we're still only two years in!). One wonders what would have happened to Glencore if Credit Suisse had been forced to pull the finance lines they had with the company at the time of the global meltdown in 2008? To the winners go the spoils.

Maybe people heap praise on others too easily? I'm sure that the "G-word" has been used too many times over the years. Consider how Alan Greenspan was anointed as some sort of latter day Moses every time he came to congress - we know how that ended. Mario Draghi is getting the same kind of treatment. All of a sudden his ability to push beyond the actual legislated mandate of the ECB is being praised by bankers everywhere.You know that Bernanke wants some of the action that Draghi is getting, but its really a lot more complex for the "Bernank" as his mandate is multi-faceted. If he keeps his ego in-check and states the obvious, i.e. Congress needs to step in and do something now because QE does nothing more than pour cash into a pipeline blocked up by the banks unwillingness to lend.

One consumer note . . . Late in the day Burberry that Lazarus-like luxury brand has warned on earnings.The FT quotes the CFO:

". . . the number of people entering its stores had dipped in recent weeks. It is the last couple of weeks we are particularly referring to – it is actually a very broad-based slowdown,  . . ."

Something had to give. And luxury goods seemed to sail through much of the havoc aused in 2007-8 unscathed. Not anymore.

I was lucky enough to finally receive my Evo Supersix today. There is real genius in the design of this bike. The pictures (see below) don't do it justice. For a start the top tupe is far thicker than it looks in the photos and the spider crankset is elegent in the extreme. 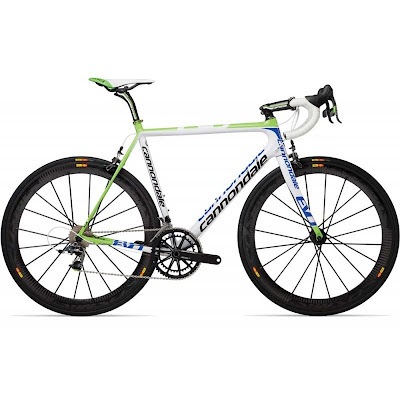 I took it in to Mike Shaw at Attellier de Velo (http://www.atelierdevelo.com) in Sydney to have it fitted and I got plenty of comments. One chap wandered over during the fitting and asked how Mike (a non-Cannondale dealer) could have the 2013 model here fr people to try. I had to expalin how I'd ordered the bike many months ago as a 2012 request and because of a snafu had instead received the 2013 as compensation. I got the sense he wanted to buy it from me there and then. Given my unemployed stated I may have been tempted to pop it out, but I just have to ride it at least once.