The cockroach theory and watching your back . . .

"One cockroach fact that you may not like is that if you see one cockroach in your home, there are likely many more."

“RBS traders and their managers routinely sought to influence the firm’s Libor submissions between 2007 and 2010 to profit from derivatives bets, according to employees, regulators and lawyers interviewed by Bloomberg News.”

It didn't take a genius to track down potential Libor manipulators. I honestly feel sorry for employees at banks such as RBS who no doubt thought they were doing the right thing when they sought to influence daily Libor sets so as to improve either a) the way the markets viewed the credit worthiness of their employers or b) claw back some funding for their overly geared balance sheets.

The effective freeze in interbank funding in from 2007 to the present has forced many banks into a game of chicken with short sellers and regulators. If they flinched and ran up their Libor bids it was a sure sign that they were the next target for a run on their shares, bonds or most disastrously deposits. That is why today we have situation where the banking system is being kept on life support by central banks; anything else would be too politically unpalatable.

Given this background yesterday's Op-Ed in the FT by Philipp Hildebrand (former SNB chief and architect of the CHF/EUR peg) and Lee Sachs (CEO of Alliance Partners) made shall we say . . . interesting reading?

"We propose that the biggest eurozone banks should be required to meet Basel III capital standards by the end of 2013, following a rigorous and credible validation of their balance sheets. To ensure credibility, the ECB should lead this validation. Banks should be required to increase their capital ratios primarily by increasing equity – not by reducing credit and so deepening the crisis."

The problem seems to be that banks are unwilling to go to the equity market in the required size because they may be signaling their own weakness. So the authors are suggesting banks maybe left with governments effectively offering to sell puts to potential investors so as to avoid having to purchase the shares themselves at this stage. Clearly the reason why this "put" mechanism needs to be in place is that governments such as Spain are least able to find the capital to support an outright share purchase scheme, their only recourse is to go cap in hand to the ECB, which in turn causes the very financial markets they would be supporting to weaken badly (if not panic outright). The one thing that really needs to be said is that while equity holders will be diluted severely under the plan, then bond holders need to also take a haircut because without this it is unlikely that the free flow of capital envisioned by the authors as being the desired outcome will not take place. I think the idea is interesting, but the complexity could have been dreamed up in the structured finance department of many of the banks they are looking to support and I thought that we didn't necessarily believe in that type of "stuff" anymore?

Maybe that's why the Singapore Government's main investment arm Temasek Holdings is looking to offload their 18% of Standard Chartered Bank.

Sometimes you need to keep an eye on the road behind you as well as the one ahead. Things have a tendency to catch up with you. Thus I was interested to see the Cerevellum Hindsight cycling computer with built in rearview camera. 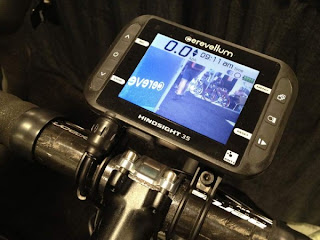 It records continuous five minute loops, so in case of an accident you'll have some evidence. The one thing it doesn't have is GPS, so even though you'll have the usual stats (speed, distance, cadence, etc.) you won't have positioning which we all like for our Strava accounts. My other worry is the distraction value. I am very anti road riders wearing headphones, so I'm not sure continually checking your rear like this doesn't add danger rather than mitigate it. It's an interesting start and for $299 it will tempt a few people. Not just me yet. Then there's that other question . . . How long before Apple brings out an app that does the same thing with your iPhone5, 6, 7  . . . .