Have you ever built a spreadsheet for modeling discounted cash flows? There's usually a cell right up near A1 where you put the "risk-free" rate. As you gain sophistication and move the duration of the asset you're trying to value out you usually start adding in a whole curve of risk free rates. 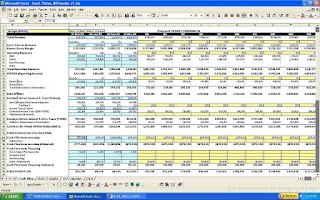 What Bernanke did last week was to change those cells down and thereby raising the overall value of the asset in your model. Magic, right?

So you have your new cheap money to set up a business? You don't? So you go to the bank and ask for some and they say what? That's right . . . No. Here's the problem: the banks have to retain earnings so they can meet the additional capital requirements of new regulation, such as Basel III. Therefore Mr. Bernanke can buy as much MBS as he likes, it won't force the banks to transfer those lower rates on to businesses and homeowners. It's all stunningly Japan like in its' arrogance. The banks are covering over the transfer problem by saying they have huge backlogs of demand and that they cannot process the paper work:

“In the very near term [QE3] has virtually no transfer mechanism whatsoever to the customer,” said one executive at a leading lender, who requested anonymity. “Originators are massively backlogged in terms of origination volumes.” (FT)

What they should be saying is we don't want to increase the size of our loan books with rates being this low. In Europe where things are a little tougher at the moment they have a similar situation, but it manifests itself through a lack of investor cash for Asset Backed Securities (ABS). What's been happening is that because of the continual downgrades by credit agencies and a lack of faith in the liquidity of the system that ECB has been offering financing on these products at a better rate than the market, meaning that a lot of new paper that should be privately held is instead being used in repos by the banks. Why is that important? . . . Well primarily because people looking to refinance aren't able to access the cheap money, only banks can . . . thanks to ex-Goldman's apparatchiks Mario Draghi.

A mate of mine went on an investor tour of Fortescue Metals Group's operations back in 2007. At the time the company was trying to roll some debt facilities. 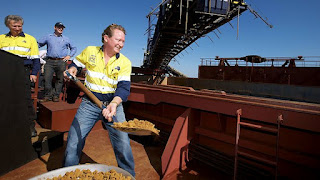 My friend wasn't an analyst with an an MBA or a CFA, but he did understand leverage and so he came back bullish the company on the strength of his own views on Asia and the possible returns to shareholders. Now we find that with iron ore below $90 that the reverse is the case. The plan announced last week for $300mil in savings looks suspiciously like the company is praying for a turnaround in China. They are doing as little as possible to calm investor nerves and to avoid a fire sale of assets. Australia as a nation has similar leverage to FMG, its not so much in the public sector, but its there in the banks and with the consumer. I'll be watching the spring real estate sales as a guide to where my home nation is going.

An article appeared in Velo News today that discussed the 2014 cycling World Championship which is currently scheduled for the small town of Ponferrada in north western Spain. These type of events are usually (in Spain) sponsored by the provincial governments, but as such governments are functionally bankrupt the president of the Spanish cycling federation is "encouraging" the organising committee to find dome private sponsors. I'm not sure if Spanish cities know what private sponsors are? I mean traditionally that would be a signal for a trip down to the local caja (regional bank) to collect some cash, but now with many of these government owned banks being under much tighter regulation that seems an unlikely target for largesse. Things are bleak when cycling starts to take it in the neck. Maybe Madrid can ask the ESM for some cash and save them the embarrassment of actually having to give up the event? In fact of course thats what will happen as the State of Leon will ask Madrid for funding and they will ask in turn for help from Brussels . . . So maybe the sposors of the event should be the German taxpayers?

I managed my first 50km ride since being in Australlia. I did the run along the coast from Watsons Bay and "The Gap" climb all the way down to Little Bay. 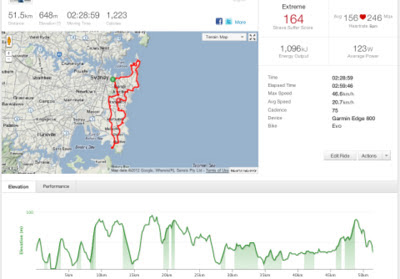 It was a great morning, though I lost my way several times as things have changed so much in the southern sector of my ride since I last ventured to these parts that few of the traditional landmarks were visible to help me. When I was growing up all you had at Malabar was public housing and Long Bay Gaol. I guess it speaks volumes for Sydney that 1 bedroom apartments near the gaol are for sale at a mere $495k!. Nice view of the ocean though . . .