The truth behind yesterdays move by the Bank of Japan (BoJ) is out. Apparently exports cratered in August. Today's data showed that shipments down 6 per cent from a year earlier to Y5tn ($64bn), while imports were 5.4% lower at Y5.8tn. That's 3 months in a row now. Thus the panic button being pressed.


The thing that troubles me about this is the brinkmanship that the BoJ has played with the Japanese economy for 20 years now. Surely the BoJ knew about these export numbers weeks ago? Maybe they realise that they have shot all the bullets they have, so the only thing that moves markets now is the shock factor . . . . 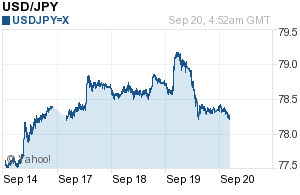 Too bad the FX market didn't care as the JPY is now stronger than when the BoJ announced the fresh stimulus.

Meanwhile China also has it's own problems, so today's HSBC Flash China manufacturing PMI while nothing to cheer at a  terrible 47.8 is at least up from 47.6 in August. I really don't know what that means anymore because for so long I've believed the Chinese numbers to be less than rigorously collected.

Debt remains the biggest problem the world faces because the deleveraging we're going through is the ire of central bankers. The Economist recently updated their online interactive debt map. 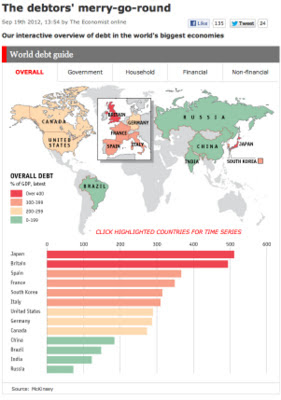 I think it's a great graphic that shows total public and private sector debt in various countries. Notice Japan? 20 years of stimulus encapsulated in one nasty red bar. Meanwhile rumors of a Spanish downgrade to junk debt status (via Moodys) are swirling around the bond market. If this happens we're going to be bombarded by images of Mario Draghi and his printing presses. Last week BBVA sold three-year bonds last week at a 4.375% and earlier this month, Telefonica sold five-year bonds with a 5.8% interest rate. Given the positive effect of the ECB plan this was all taken as positive proof that things were bottoming in the bond market. So what now? If Spain is cut to junk how can BBVA and Telefonica raise cash at these levels. The inference must be that the Spanish government would need to claw back further corporate revenues via taxes or outright nationalisations. Far fetched? Maybe, but what else does junk status imply? Too me it says anything can happen. I think you get a chance to buy some good corporate bonds in Spain at a genuine discount to today's prices.

If it wasn't bad enough that markets were in a precarious position I too had to suffer from the dangerous driving of a particular Sydney lunatic today. I mean why a 65+ year old man in a black hatchback has to honk his horn for you to get your bike off the road when he was clearly in a hurry to go nowhere. I pulled up along side of him at the next set of lights and was met with a good spray of expletives. Clearly I'm no shrinking violet so I too summonsed a few choice words of my own. It was a great lesson for my new riding buddy who observed everything. I don't get Sydney drivers? It was a beautiful day around 11am, not a cloud in the sky and this guy wanted everyone to know how important he was. Jeez!

In the Netherlands they got through the time trial with blistering rides from the winner Tony Martin and runner-up Taylor Phinney. I follow Mr Phinney via Strava and it's great to watch his prep. Check it out here. Here's his recon ride from the day before the race: 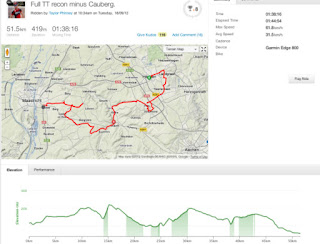 He'll upload the race itself later, so look out for it. Strava is a great tool and worth getting a free account if you're into to cycling or running. If you want to see a real torture ride this is Phinney's day on the bike for the Milano-San Remo: 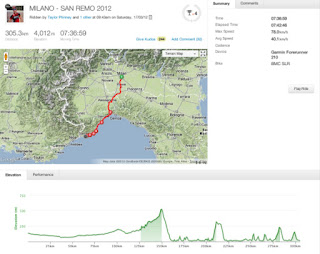