Spain . . . what is reality? The reality is that people are revolting . . . so to speak. Last night Catalonia announced a snap election with overtones of rebellion and an implied threat to leave Madrid. I can't say I'm surprised. This is what happens when a country gives up it's sovereignty, which Spain did when it adopted the Euro. At the time it looked all roses, but history has a way of catching up on people and now at this time of desperation the Spanish people lack the one mechanism that could let them determine their own future . . .  the Peso.

I don't think Catalonia will leave Spain. I also don't believe that Brussels will let the German, Dutch and Finnish block the Spanish bank bailout over their insistence on a timetable that calls for supervisors to be in place prior to recapitalization via the ESM. But, what we will see is something important tomorrow when Spain announces its budget.

Spanish jitters are one thing, but when one of my favorite companies CAT announces a minor downgrade and gets absolutely slayed for it you can see the perilous state of the markets. CAT finished down 4.25% after Doug Oberhelman (CEO) said “I don’t think the situation is as grave as it was in 2008, but the uncertainty, the storm clouds are around things that none of us know about – like what will happen with the political situation in Europe.” He went on to say he believed China and Brazil had bottomed and the US looked good. Mmmm . . . calling the bottom is interesting especially when we have Toyota slashing production destined for the Chinese market. Of course some will argue that this is Toyota and Japan Motor Inc. failing v. the competition, but I think its more a strategic move by Toyota in the face of a Chinese slowdown that is still to see rock bottom. Whatever the truth we'll have more clarity by year end.

Unlike Brussels and their new world champion Philippe Gilbert, the Spanish had little to cheer about at the cycling world's on Sunday. Alejandro Valverde won the bronze, but the stink it created when team captain elect Oscar Freire said that Valverde should have stayed with him for the Cauberg rather than immediately setting sail after Gilbert was palpable. Freire finished 5 seconds behind the leaders so maybe he had a point?

I wanted to show you the stats from the race. Here's the Strava details from Dutch squad member Laurens ten Dam: 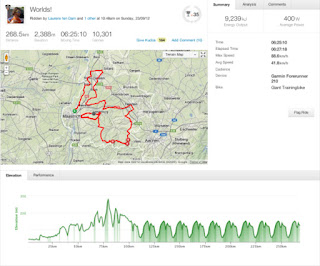 Do you see the Calorific expenditure. That's 10,000 . . . count'em 10,000 calories drained over 6hrs 25 mins. I don't know about you, but Mrs. Ibcyclist and myself didn't average anything like 41kph on our ride to today in the safety of Sydney's Centennial Park.