Diminishing effects and some cycling thoughts . . .

“It looks to me as though each round of central bank stimulus is having a diminishing effect,”  . . . Central bank (and government) actions may have stabilised markets and economies, but they have also ‘kicked the can down the road’. They have not resolved the fundamental underlying issues that need to be tackled for a broad-based and sustainable macroeconomic recovery.”

I heard an interesting interview today with Steve Hanke Professor of Applied Economics at John Hopkins University on Bloombergs On the Economy radio program. Professor Hanke recently published a paper chronicling cases of hyperinflation around the globe starting with the first case during the French Revolution. 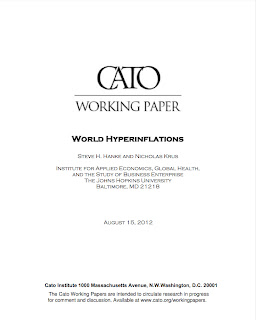 I thought the Professor was going to say that the QE we're seeing in Europe and the US would eventually lead to hyperinflation. Instead he said that he didn't see that because, if I understand him correctly the amount of money that is disappearing or being locked up in the banking system is offsetting the Central Banks printing of cash. Of course the trouble comes with an exit strategy as we go into QE-ternity. He suggested that governments would be better off shutting down QE and increasing credit supply via the softening of some of the regulatory goals of legislation such as the Dodd-Frank Act and Basel III.  This makes more sense to me as a long time observer of Japan because at no stage during their many long years of ultra low rates has that country looked likely to succumb to hyperinflation. Rather the problem has always been the continuing blockage of normal credit supply due to continual recapitalisation and a Zombification of certain assets never removed from relevant balance sheets.

The problem of course is that the legislative arm of many QE orientated countries lack outright support for a change in how they deal with their banks. If we return to Spain it seems foolhardy to expect voters to support a lossening of conditions of private banks. Instead I believe that the only solution is nationalisation so that public support coalesses around the view that as the banks are state owned then the "evilness" can be squeezed out without shrinking the credit supply. This of course will be difficult because Spain doesn't have a balance sheet in the way the US does and therefore has to rely on Northern European largesse. Perhaps we need to go down the route that the Finns are suggesting and pledge some banking assets to Europe in return for support? Either way the clean exit and return to normality is hard to see right now. I highly recommend reading Professor Hanke's paper.

I got a note from a mate who's recently taken up road cycling. He asked a couple of questions and was wondering how my own cycling was going, so I thought it might be interesting to share my thoughts and answers on this blog as part of my on going efforts to convert the many cycling skeptics to true believers . . .

I think it's absolutely compulsory to get a proper bike fit.  My preferred local bike shop (Attelier de Velo in Sydney currently) put me up on both my Pinarello and my new Cannondale recently. It was a fairly straightforward process, but during the fitting I learned about the importance of fit in respect of relaxation of the upper body on longer rides.

I also now have witnessed a friend being fitted and it's fascinating to see a bike fitter try and get the most of a mismatch between rider and frame. Mike, Chris and the guys at AdV don't like putting people on unsuitable frames, but as the idea was to just give my friend a chance to get to know the way a road bike (my BMC) works they did their best.

I know many riders find the height of the position on a road bike disconcerting at first. My NY based friend said he felt like he wanted to get lower. That's OK you can get lower by riding in the drops or out on the hoods of your shifters. You should be doing this anyway because it allows you to slice through the air. Keep your elbows in, kind of like when you ski. If you look calm and elegant on a bike you probably are in more control and your muscles can relax into the the rhythm.

There is one thing that Geneva lacked . . . good coffee. In Italy and here in Sydney thanks to the vast number of Italians who immigrated here after the war the coffee is very good. After a long ride a good coffee serves as a pick-me-up. I usually head for my favorite spot in Elizabeth Bay after a ride around the cliffs that run from Vaucluse, Watsons Bay, Bondi and Clovelly.

I'm a pretty big unit, even if I've lost a great chunk of weight since living in Singapore. The basics are if you lose weight you will climb hills faster and faster. The other thing I'm appreciating is the importance of your core muscles when riding on hills. If you strengthen your core you are able to relax your upper body and in turn you'll find yourself not so much as gripping the handlebars, but rather guiding them. The result is you tend to open up your chest and take in more oxygen.

My gym trainer is trying to help me build strength and flexibility in the upper body. He's also making a point of trying to get me to stretch my abductor muscles so I feel better after training on the bike. The thing is if you become obsessed with cycling you spend a lot of time hunched over and you need to stretch properly after a ride to get back into a correct posture. When I did my first 100k ride I literally couldn't sit down, my body just wanted to unwind.

Strava, alone and with others:

I use Strava as a record of my rides. It's my version of taking photos of all the places I go. The ability to see the segments (climbs, descents, sprints, etc . . .) is fantastic. Lately I'm also trying to make notes as well, kind of like the labels you used to put in photo albums. I wish I could add photos to individual rides as you'd have a perfect scrap book.

My NY mate is always very cautious with new devices etc. and being able to justify things. In cycling I say upgrade if it makes you ride more. If your goal is to lose some pounds and you're primarily going to do that on the bike then you need to feel good being on the bike. If you think new red pedals will put a smile on your face and make you want to ride then I say go for it.

If I'm happy I ride. At the moment I'm happy so I'm on the bikes 4 to 5 times a week. My new Cannondale Evo makes me smile.


I love the feel of speed it has. I like the paint job and the clicking of the Mavic Cosmic Carbone SLR's. I went for a ride this morning. Nothing special I just couldn't pass up the chance of a sunny day climbing the hills around Sydney's beaches. 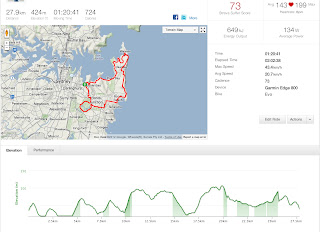 It wasn't a long ride, nor was it particularly hard, but it felt good. And you know all the money I spent on my bikes has helped me stay sane during the crazy time of had leaving Switzerland. I'd gladly get back on the bike right now if a friend stopped by for a ride.