Time to ride away from some dodgy Spanish thinking . . .

The one climb I'm sorry I missed in Northern Italy is the Ghisallo. I've been to the bottom in Bellagio on Lake Como on the day before I drove down to Treviso to pick up my Pinarello Dogma, so I couldn't do the climb. It's a spirtual jouney of 10.6km to the top where you stop at the chapel of the Madonna del Ghisallo and beside it the small cycling memorial to Coppi and Bartali. 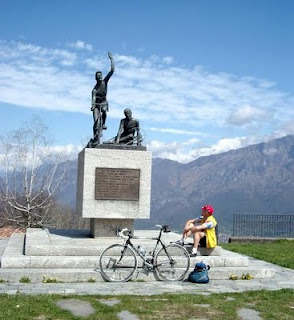 In 2006 they opened a museum to cycling, but I think the museum is the hill itself and the names printed in clear white on the road showing championship years, times and elevation.

On Sunday we begin the latest running of the Giro di Lombardia - or simply, Il Lombardia. It will also be the first time in 50 years that riders have been asked to climb another famous hill,  Muro di Sormano.

The Muro di Sormano lies about two thirds along on the the 251km route from Lecco to Bergamo. The climb itself has been restored after many years of neglect. The tarmac is freshly marked. 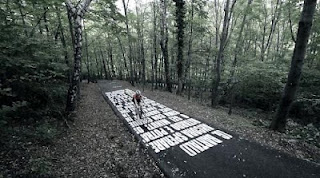 Below is a film by Cycling photographer Jered Gruber of the route and even though the climb has an average gradient of 17% and ramps up to 27% I defy you not to want to jump on your favorite bike and try it.

I'll be west of Sydney tomorrow and I'm taking my bike. This will be my first ride in the Blue Mountains and I've planned an 80km ride between Mt Wilson and Blackheath. There's only a 5k section of road on the Great Western Highway that I'm not looking forward to, but as it's a long weekend here I'm going to hope that the big rig trucks that usually make the run from the agricultural heartland from the west into Sydney might be at home relaxing for once.

I bought a special rear light for the ride from Attelier de Velo. It's a Moon Shield (USB chargeable) with up to 60 lumens of brightness. There are five settings, three steady and two flashing, one of which is a psychedelic strobe. I can tell you from testing it that this sucker is bright.


Maybe regulators and supervisors could use some brighter lights when looking at Spanish banks. The FT tells us that "seven out of the 14 Spanish banks under review failed according to the results of the three month so-called “bottom up” review, which involved the individual assessment of 115,000 loans making up 11 per cent of the value of the sector’s total credit assets." This all sounds like good news until you realise that the modelling for total losses was 17% v. 24% they used for Ireland. I don't have the models, but I wonder what happens if you look at the greater number? I'm guessing 100bn isn't enough.

Of course who cares about Spain, right? I mean it's too big to fail? What about if we look at it like an another example where monies are injected at one end of the banking pipe and it fails to show any effect at the other end, the liquidity end of the pipe? That's because we have a solvency problem with banks in Europe, not a liquidity problem. There's plenty of liquidity thanks to Draghi. Some of these banks need to fail and get out of the way because only then will the cash get through into the economy.