I finally got a chance to sit down and write a few things for the blog. It's been an interesting weekend so far and hopefully as I write this we will see the final 100km's of the Liege - Bastogne - Liege bike race develop into something special. Judging be the pictures it must have rained earlier and after my ride yesterday I have some understanding of how difficult that can be.

So a short ride of 45k's yesterday felt like about 80k's yesterday as the wind and rain hit me hard on the run down the hill at Ballaison. My original plan had been to just ride for an hour after lunch around the slopes that surround our side of the lake here. I was feeling so good that instead I extended on a new route via the little town of Gy about 15k from Geneva. 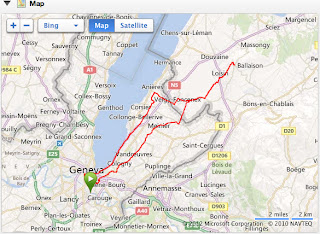 Anyway all was fine until the return trip were when first I got hit by the wind and then the rain. Luckily I had my lightweight rain jacket in my back pocket. It was the wind that really made it hard work. An an example I usually come off the Ballaison hill at 55 to 60kmh, but not this Saturday. the wind was so fierce directly into my face that I was restricted to about 30. To top it off as I snaked down the hill I was hit by a side wind that almost pushed me off the bike and had me wishing that I'd switched to the non aero Easton wheels before I went out. I made it back, but was out or over 2 hours and was lucky to average 20kph.


I got a reward though when we drove back later to a restaurant in Douvaine named O Flaveurs. I can testify that it deserves its Michelin star.

Finally as I write this the French Presidential election first round results are coming in. The nationalist right got a record 20%. The liberal media is going to have a meltdown trying to explain this.

I still think Hollande wins the run off, but its going to be closer than I thought. Either way though I'm not sure the markets will take this well. My favorite socialist policy is the luxury goods tax. I mean I've lived in mainland Europe long enough to know if you can buy a bag cheaper in Frankfurt than Strasbourg you are going to take a weekend break over the boarder. The Italians already put a cap of E1000 on cash payments for goods so they could track money laundering. That has killed foot traffic at Gucci in Italy . . . and ironically it's owned by the French. I mean really . . .  how many police are going to be manning boarder crossings checking handbags?? Please, it reminds me of the master plan of the 35 hour week that said if everyone works less hours than big business will employ more people. Jeezus, these people are they all idiots?