I guess its priced in, ... kind of. I didn't expect Brazil to cut rates by 75bps bringing them down to 9% for the first time since April 2010. So what do you say? It's good for equities you say? It shows the rest of the world that the BRICs will bail us out you say? Rubbish. It shows economies in BRICs are not going to bail anyone out. They are hurting because they rely on exports. Even India exports .... exports its human capital and it imports a truck load of energy which costs a lot more now.

I feel like its getting to the be every man/woman for themselves part now.

Check this out from Moodys: 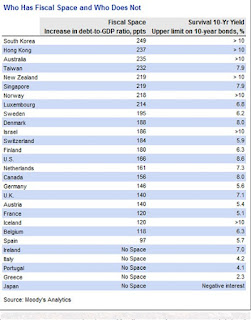 I honestly don't care about Moodys as they have helped to perpetuate much of the damage to global economies in the last 10 years, but in this case I thought they have summed up things quite well. So for instance Italy would need to reduce its long-term borrowing costs to 4.2% in order to return to a sustainable path. Japan is a basket case and how they can give the IMF 60bn is a joke of monumental proportions. I wonder why the BRICs aren't on this table? Makes you think?

I had lunch today with a friend who mentioned that a huge chunk of arable land in Argentina is owned by foreigners. I didn't know that. Will the mad women scoop this up next? Given the support she's had in Argentina why not? Probably gets her or husband or some other relative elected next time the country goes to the polls.

The rain today forced me into the gym. A one hour workout followed by lunch. Not a healthy day, but this rain is starting to get to me. I should mention that I won't be riding leg 2 of the Piemonte Cup. I was scared off by someone I met at Novi Ligure who told me it was tough, very tough.

I looked up the course and I have to say it looks ... challenging? This is the medio fondo: 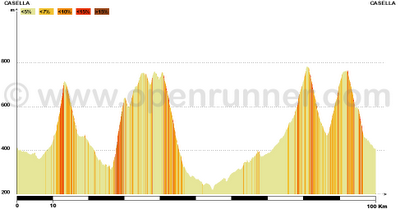