The last 6 months have been hard to take if you are a global growth bear. The key was always to hold your nerve and get the timing right. One of the principal battle grounds for this has been the copper market and the derivatives thereof. As I've written before the war is a battle between:


a) Global growth / Chinese growth as a proxy for demand, and

b) Production limitations that expect 500,000 metric ton deficit in refined copper this year

Now I know that the last few days have confirmed that growth is slowing. Chinese GDP "officially" now at 8.1%, but even that looks shaky. Brazil with emergency rate cuts. And European governments pressured about funding huge deficits. I agree with the production side of the argument because we saw the evidence out of that with the news earlier in thew week out of Chile. But what to do?

China makes up 40% of copper demand, but stocks of the metal in China have risen to new highs. Stocks ex-china have been falling, but this is where it gets tricky. If the rest of the major infrastructure builders of the BRICs slow I'd expect copper demand to fall back and we'll be left with an overhang. I feel it's already turned ahead of what I'd expect to be weak summer data from China. You have been warned.

While at the gym today I noticed UK retail spending was above f/c. Readers know that I'm more happy with the pound now that QE doves have stopped their constant demand to roll the presses. Now we get the news that retail sales rose 1.8% between February and March and 1.5% ex car fuel, while expectations were for  a 0.4% without car fuel and 0.5% with. Part of this was the warm weather, which economists always get wrong. The UK just looks better than the rest of Europe.

One last word on Europe . . . . If Sarkozy loses the presidential election just pray that Hollande steps back from the edge before he jumps. Another good reason to hide in sterling. You be the judge.

So the weather here today forced me into the gym. I worked out for an hour and listened to the guys from Cycling 360 podcast. 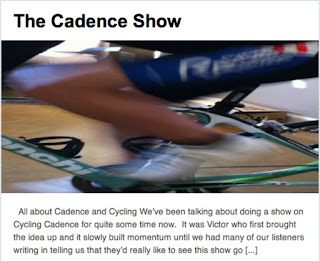 A really interesting show that helped clarify in my mind the advantages of understanding cadence. Sometimes it can be really obvious that just sitting in a grove at say 90rpm doesn't always work. Other times you need to get passed to prove it. You have to understand that certain points on your cadence range when properly stressed can improve your overall performance. A great show. Thanks guys.