So Argentinian nationalism is back. First we had all the noises about the Falklands and now fruitcake President Cristina Fernandez announces on live television that state oil corp YPF would be 51% nationalised. That leaves Spanish giant Repsol looking for 10bn in compensation .... mmmm ... good luck with that. And good luck to Argentina on getting foreign investment. Cristina and a bunch of other LatAms have decided that Chavez was right. What are they thinking?

So out of this comes opportunity. The Telegraph quotes Stuart Joyner, an analyst at Investec, as saying: "We had hoped that Argentina would pull back from this extreme action, but, now that this is apparently off table, our worst case scenario values Repsol (with YPF at zero) at €15.62 [...] At a minimum, Repsol is now set to lose control of YPF and, of course, any compensation seems set to be at current depressed prices."There you have it. Now do the simple work and compare it to BP during the gulf oil spill. Bingo!

The other sun that was shinning today was Geneva's. Its still a tad cold, but sun is sun, so time to ride. Total today was 65k's. It hurt a lot. You lose condition really fast. The gym can't compare to open air exercise. Lately I've tried to make things at the gym more interesting by using the climbing and gradient programs on the treadmill and the other cardio machines, but it's really not the same. My times were pretty pathetic, but at least 1700 calories got shed and that makes me feel better. I stopped on the way back down the plage to take in Geneva. You know even though I'll be happy to head back to Sydney this place still has a certain something about it. 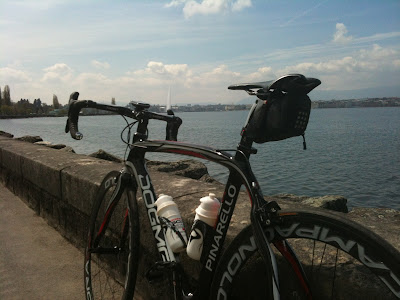